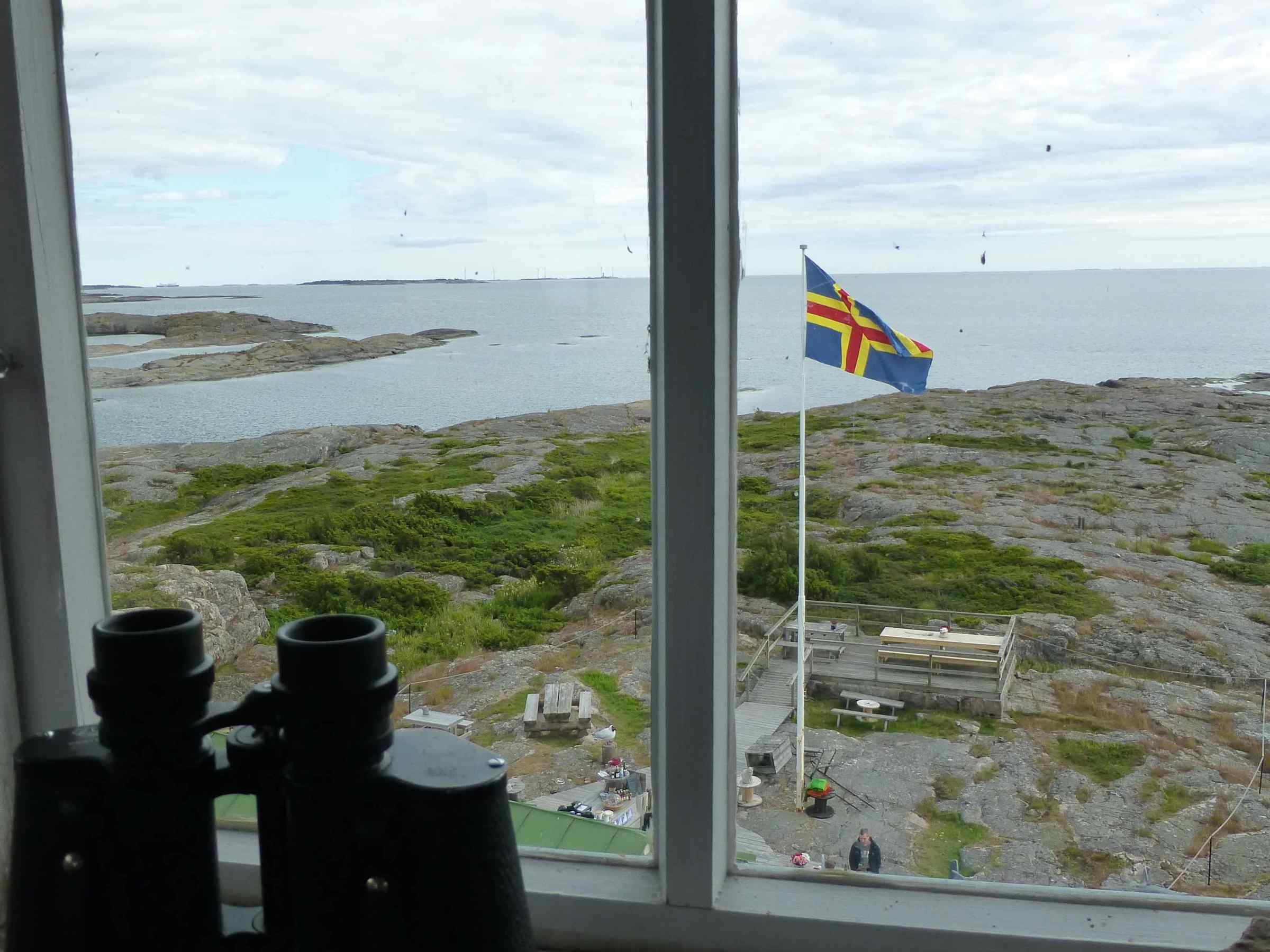 West we must travel, we need to get to the Åland Islands and onto Sweden, we could easily spend another month in in these Finish islands (visiting every sauna – not), but we really should save some sunny days for the Swedish Archipelago, which we are sure will be just as great – so on we go.

22 nautical miles covered with only 1.5 hours of the 5 hour journey done under sail – small victories.  When sailing, it was blissfully peaceful (no engine noise) and felt great with 17-20 knots of winds we were cracking over 6 knots speed and on quite a reach as we were sailing close to the wind. Fantastic.

However due to the many islands and narrow channels and constant directional changes around the islands it only lasted that first 90 minutes before making it impossible to sail, but hey better some than none.

We dropped anchor in the N/E bay off Sandö Island in 2.5 meters of water.  Quite weedy, which makes us nervous about rocks but good holding and sheltered.  We didn’t go to shore, just enjoyed the tranquility.

We were now in the Aland Islands, whilst officially Finland it is an autonomous province, they have their own governing body (separate of Finland), their own flag and they actually speak Swedish. The Aland Islands consist of 6,700 islands (don’t stress, we are not going to visit them all).  We are really just going to gather ourselves re-stock with water, food and power (been off the grid for 20 days now) then head to Sweden.

We lifted anchor and spent the day motoring with some patches of motor-sailing with the genoa helping us along the 23 nautical miles to the capital of the Aland Islands that being Mariehamn.  Soon enough it was 4pm and we thought (being tight arses such as we are, without any income) that rather than go into Mariehamn now (late in the day) and have to pay for a nights marina fee’s we should stop at a nearby nature island (free) and then go into Mariehamn early in the morning, therefore getting bang for our buck (a full day & nights worth of services).  Good plan – and that is how we ended up at Kobe Klintar 4 nautical miles from Mariehamn.

Room with a view

Picture window from the outside

Kobba Klintar (island) was a great spot to pick as it is an ex-pilot station, meaning that it used to house the pilots for the boats coming in and out of Aland Islands.  The old pilots cottage built in 1862 is now a cafe and next to it stands the newer bigger, taller pilot house built in 1910 to house a very large foghorn.  The pilots left the island in 1972 and then in the early 2000’s a society was formed to restore the island and open it to the public.  It is small, cute and loved by a precious few committed people who run it as a tourist attraction.  A very popular day trip (or evening BBQ location) for locals out of the capital.

On watch at the pilot station

We had one very excited Captain as we were securing to the wall in the harbour as he excitedly pointed out some wildlife “there is seal in the harbour” he declared….turns out this seal is a cleverly disguised buoy!  Whoops! (see picture above – the ring in his mouth might have been the giveaway, they don’t normally take your lines for you)

We motored into Mariehamn the next morning a very short journey (less than an hour) and made ourselves at home in the large marina.  Twice.  By this I mean we cruised the marina looking for the ideal spot, found it, set up (stern buoy & bow to pontoon) and in we went, perfect – for a while.  We secured and let the boat settle for a while (read here plugged into electricity and had a cuppa tea) then noticed being on the end of the pontoon we were pulling fairly sideways in any boat wake.  That’s ok we will just tighten the stern line out the buoy, excellent, nope not quite enough, tighten it some more – well hang about a minute the buoy is now pulled tight right onto the stern of the boat (under the dingy which hangs on the back deck on davits).  Hmmmm…… ideally we would be fine if another boat came beside us and blocked us in square but that’s not going to happen if they can’t reach the stern buoy under our dingy.  OK, move we must (sigh…..) so a quick walk around the marina to check out other spaces and we moved over to the other pontoon for the big boats (most a bit bigger than us), well this time, wouldn’t you know it the buoy was so far out that we had to join another line to our stern buoy line to reach!  Sigh….. Anyway we were good, a lot better than the first spot.

We filled the water tanks and plugged into mains power, to cook electric rather than use any of the precious little gas we have remaining (it being a real challenge to get gas bottles refilled as each country has their own type, connection and set up – and we visit a LOT of countries making it too expensive to change bottles each country so we are very much gas misers) we also plug in to recharge the house batteries, which didn’t really need it but hey we were paying for it – after being off the grid for 20+ days we still had over 80% in the battery/power bank.

The washing machines were also appreciated, and we had a couple of indulgent (longish) shore showers (gave the attached saunas a miss tho).  I should explain that we have a shower on the boat and it is a very very good shower, hot and lots of pressure – we both love showering on the boat, however to conserve water (and minimise using the grey water holding tanks) we tend to only use it when ‘shore’ showers are not available.

It was a great weekend to be in Mariehamn as they had lots on (being mid summer).  Firstly we knew of the Aland Sea Day’s event which was on the other side of the town at the other marina, a short 10 minute walk away.  There were maritime activities, kayak excursions, sailing cruises, bark boat building, demonstrations of old boat engines, lots of wooden older boats, a museum and live music (old folk music and reggae).

After walking into the town centre we also discovered that is was the first weekend of “Rock Off” a two weekend local Rock Festival.  We got ourselves a copy of the program and decided to go to to the concert that night as although the program was written in Swedish or Finish (not really sure which – but definitely wasn’t English) we could pick out that tonights band were playing 70’s rock classics by; Status Quo, David Bowie, Creedence Clearwater Revival, Deep Purple and others.

Now when I say we decided to “go to the concert” I of course mean sit in the park outside the concert and listen.  We were not the only ones however (many others also had the same idea).  Anyway our piece of grass was fantastic, and had a stage view (via the long zoom using the camera – see picture below).

It was a great night for our picnic (pizza) in the park with the music despite the fact that they were not singing in English we knew each song via the tune.  The following weekend of the festival (we would be long gone) had the headline acts (well bands we knew of) with Europe (The Final Countdown, Carrie, Superstitious) and Toto (Africa, Hold the Line, Rosanna).

The other attraction whilst we were there was the Car Show with many of those on display being American or “Yank Tanks” as our mate Rob would say!  At least a hundred or more older, restored, mostly low riding classic cars.  They were actually on display right behind the marina (giving us direct and free access).  So many great looking vehicles, I will try not to bore you with hundreds of pictures. 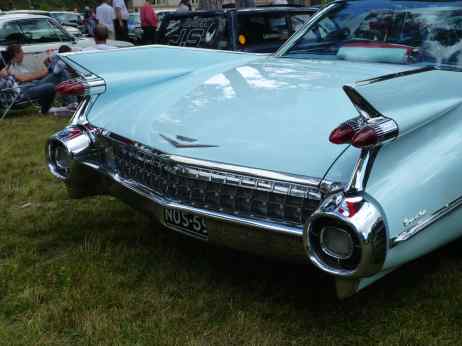 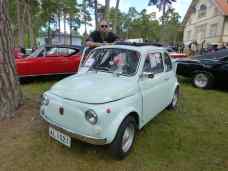 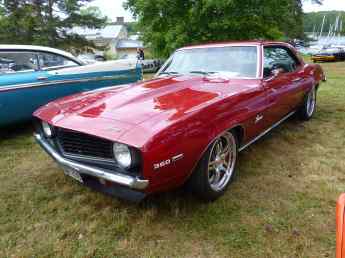 We certainly got our money’s worth of our overnight stay in the marina, having arrived 10am on the Friday, we stayed that night and didn’t leave until 7pm on the Saturday night!  We left and went out onto anchor (free) a stones throw from the marina (opposite the ferry terminal).  Our friends from “Bunny Bee” (another English Boat) tagged along to anchor beside us.  They had been even thriftier than us and had come into the marina around 11am that morning leaving with us at 7pm so a day visit without overnight marina fees!  Smart!!  We had a few drinks on-board Bunny Bee listening to the Rock Concert as background music.

And that my friends is Finland and the Aland Islands done!  It was pretty special, especially the sun shine (it’s been a long time) and the nature islands allowing us to BBQ and explore.  It gave the West Coast of Ireland (Republic Of) a run for it’s money of our favourite so far …. still in discussions as we don’t fully agree – yet.

Next we are off to Sweden (it’s not far, just half a day’s sail…. IF the winds are kind).  We will spend a few days in the northern archipelago before heading into Stockholm to explore all it has to offer.  We will then head back out and to the southern archipelago on our way towards Denmark.

← Finland Archipelago Part II – Did you know there are cows in heaven?
Singing in the Sauna – Sweden →