French Island Fun in the Sun, Swimming and Scrubbing 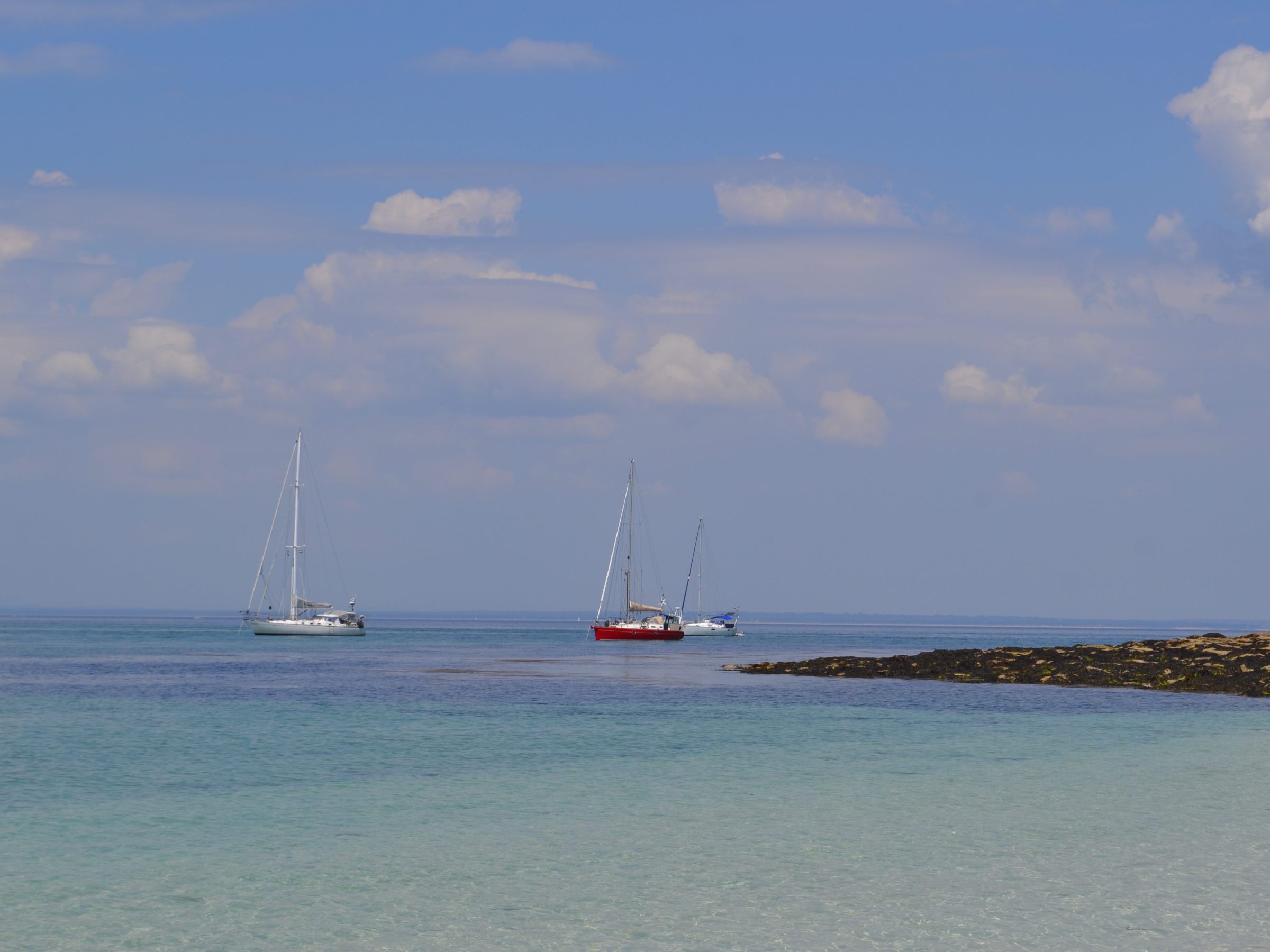 Summer has arrived at long last!  Almost three years since we left Australia and two rather cold years sailing northern Europe we have found the sun and are loving it!

It actually took a few days to acclimatise after being cold for so long, I was quite uncomfortably hot for  a while in a mere 32 degrees!, and to think we used to live in Outback Australia with the summer temperatures mostly over 40 degrees.

The white sands and beautiful blue/green water were very well received and we ended up spending 4 nights anchored there.  We were also joined by our new friends the young UK Doctors and enjoyed a BBQ together on an un-named island now christened “Gin Island”.  90% of Gin Island is underwater at high tide but the tides were in our favour to allow us to enjoy the evening and sunset ashore.

After relaxing that first afternoon which included swimming, eating, drinking and other frivolous activities we got serious and did two big days of boat jobs.  The first day was a full day of Phil and David fault finding Red Roo’s engine start issue.  A huge thanks to David for his advice, experience, help and loan of equipment (jumper cables, his battery to try in our boat etc).  Unfortunately at the end of the day we were still none the wiser, however they did rig up a wiring change and it has been working to date more reliably than it was, but as yet we still do not have an actual diagnosed fault or fix.

The following day saw David and Maree gear up to scrub the bottom of Taipan using their compressor and air hose set (type of scuba set up).  What is usually a hard job was pleasantly enjoyable in the clear, warm water of the Iles de Glenan, it also helped that Taipans bottom wasn’t very soiled and easy to clean.   While Maree continued on Taipan doing the waterline just on snorkel, David and Phil then took the scuba gear and finished the little bit (basically the keel) on Red Roo which was wound up and we were unable to access when we recently dried out to scrub our bottom.

Our final day included a journey to shore on the island where the large sailing school is and another swim for us ladies.  As tempting as it was to stay longer, it was time to move on and see more of France.

A couple of short day hops under engine due to minimal winds and two nights on anchor saw us at Lomener (23 nautical miles) and then Port Haliugen (24 nautical miles), the up side of motoring was lots of mackerel being caught on the passages, meaning fresh fish for dinner.

It was an early 6am departure the next day to arrive at the entry of Gulf of Morbihan on the correct tide to enter into Vannes (10 nautical miles to the entry, then another 12 nautical miles into the inland water of the Gulf of Morbihan and up to Vannes).  With the tide coming in we were at times doing 10 knots speed in pure current around the mouth, quite exciting.  There are thousands and thousands of boats in the gulf and a relatively limited channel to travel up to Vannes with the added challenge of many ferry’s operating in the area at high speed of which some were quite inconsiderate to yachts.

We spent 2 full days in Vannes, which was a mixed experience.  The walled old town is characterised by narrow cobblestone streets and medieval gates.

At its heart, the Cathedral Saint-Pierre de Vannes blends Roman and Gothic style while Place de Lives square is lined with colourful half timber houses.  In 1759 Vannes was used as the staging point for a planned French invasion of Britain.  A large army was assembled there but were never able to sail following the French naval defeat at the Battle of Quiberon Bay in November of 1759.  Later in 1795, during the French Revolution, French forces based in Vannes successfully repelled a planned Brittish Royalist invasion.

The buildings and gardens were absolutely breathtaking, all four of us walked around with our heads swivelling and our mouths gapped open, we also enjoyed a morning at the busy city weekly market.  I would recommend Vannes to anyone visiting the Brittany region of France.

However the experience of the Vannes marina wasn’t quite so enjoyable.  They were in the middle of changing out the old pontoon’s for new and we awoke early on our second morning to no power and no water on the pontoon, they had literally removed the services (the whole electrical box gone) and just left our power cords on the dock.  Not really a huge issue as both Taipan and Red Roo can make our own power and water, however we had chosen to go in and spend two days in the marina (at a considerable cost) to top up on power and water and to not even be told that services were being cut and to still have to pay top dollar was a little disappointing.  Also whilst we all commented on the top work rate of those changing out the pontoons (very good workers) it was extremely noisy for the entire stay early morning to late night, with angle grinders hammers, trucks and large cranes all moving gear around.  Anyway overall glad we visited Vannes despite my little rant.

Back tracking the 10ish nautical miles out of the Gulf of Morbihan and on a further 10 nautical miles we dropped the anchor at the eastern end of Ile Houat.  This anchorage is in a large crescent shaped bay with a beautiful sandy beach that at peak season can have up to 200 boats anchored in the bay – far too many for us, the night we visited we estimated around 40 boats, which was plenty we wouldn’t have wanted any more.  Taipan were boarded by French custom officials, their Australian flag attracting attention, whilst our English flag went without interest.

Next stop was a full day on the water, 48 nautical miles (again mostly motor sailing) to La Croix on Ile d’Yeu.  A small little beach on southern end of the island which gave us shelter for 2 nights and a day of swimming in the sun in-between.  The first night all the boats (about 6 of us) were all on the inside (shore side) of the yellow buoys de-marking the swimming zone as it provided a lot more shelter being out of the swell and a better depth for anchoring, however around lunch time the next day a life guard from the beach came out to each of the boats and asked us to move outside the buoys, this created the afternoons entertainment as by now there were 8 or more boats and with the water being much deeper outside the bouys two boats found it almost impossible to anchor.  One boat (which was the last to move due to being boarded by officials) we watched re-anchor no less than 5 times before he was set.  Each time he set he ended up too close to other boats and had to try again.  Another boat dragged over 5 times before giving up and going elsewhere.

The following morning we set of on the 49 nautical mile passage to anchor off the Île de Rè (a very short distance outside La Rochelle).  We were anchored a mile away from the Greenpeace boat (he was out in deeper water being a bigger boat with more draft).  We anchored in 3 meters of clear water with a firm mud bottom.  However it wasn’t a comfortable night as the swell and current rocked us around most of the night.  But it was a strategic overnight anchoring spot as it was less than 2 hours the next day into the heart of La Rochelle (more about La Rochelle in the next blog).

4 Comments on “French Island Fun in the Sun, Swimming and Scrubbing”