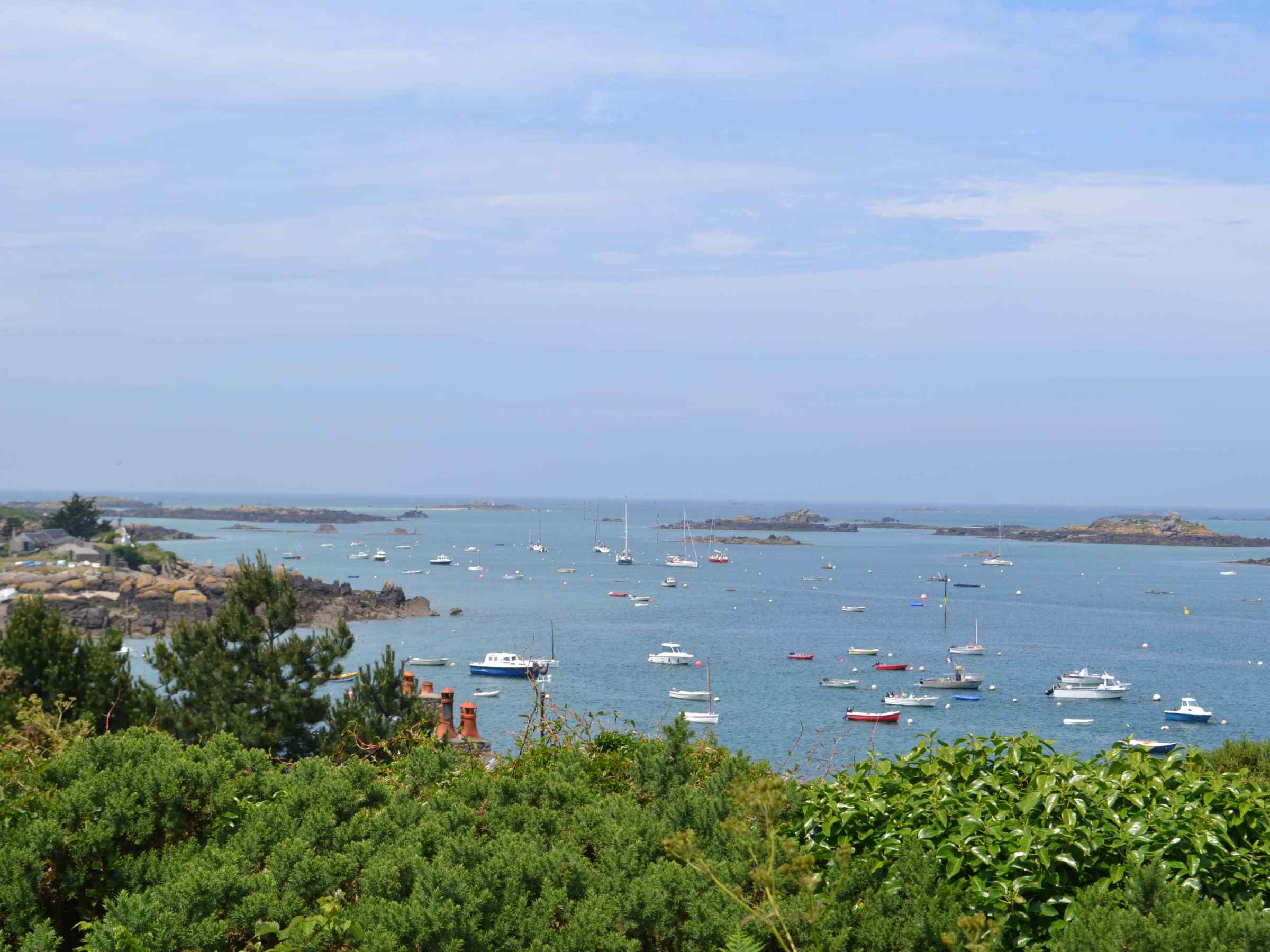 We decided to back track a little and visit the Iles Chausey which is a group of small islands, islets and rocks off the coast of Normandy, in the English Channel just 10 nautical miles from Granville.  They are the pride of the area and most boats we spoke to in Granville had stopped in on the way and all spoke of its natural beauty.

It was an ideal sail out with about 13 knots apparent wind off the starboard side, making it a very enjoyable little jaunt on the water.  Red Roo loved it and was performing her best with the new sail and we made a very reasonable 4-6 knot average speed.

We picked up a free mooring buoy, two actually one at the bow and one at the stern, as they are set up in string lines along the the main channel which despite the massive tides is deep enough to have water in it even at low tide.   The afternoon entertainment was relaxing in the sunshine watching all the other boats arrive and pick up (or attempt to pick up) the boys, despite having crews or 6 or 8 people some just couldn’t achieve this easily.

The next morning brought strong wind and heavy rain.  It eventually cleared after lunch and we launched the dingy and made for shore and spent an enjoyable afternoon wandering the island and completing a lap of the Grande Ile.

Grande-Ile the main island, is 1.5 kilometres long and 0.5 kilometres wide at its widest, though this is just the tip of a substantial and complex archipelago which is exposed at low tide. The archipelago comprises 365 islands at low tide, compared to only 52 islands at high tide. From a few dozen hectares of ground above the high tide line, the archipelago increases to around 2,000 hectares (4,900 acres) at low water, within an area roughly 6.5 by 12 kilometres. The tidal range is one of the largest in Europe, with up to 14 metres (46 ft) difference between low and high tide – the difference has to be seen to be believed.  It’s quite daunting looking at all the many many rocks and low tide.

Of a weekend and in summer this place is teeming with people on day trips from Granville, St Malo and the Channel Islands.  The many sandy beaches and rock pools that are exposed at low tide provide a great playground for young and old.

Only the Grande Isle is inhabited with a handful of local residents year round, and more in the summer to cater for visitors and the holiday let houses.

Chausey was for a long time an object of rivalry between England and France. Although the UK government has contended that, until about 1764, Chausey belonged to England, Chausey, unlike its Channel Islands neighbours, has, in fact, been French for centuries. It was administered from Jersey until 1499, when the Jerseymen abandoned it to the French for reasons unknown.

The fortress of Matignon was built in the mid 16th century as a quadrangular fort with a round tower, it was later expanded in 1740, and today is known as Chateau Renault, after the automobile engineer Louis Renault who purchased it and restored it in the early 20th century.  The government ended up taking the fort off Renault after he was accused of collaborating with the Germans during World War 2.  The fort is now a private residence.

However going back the fortress was not considered sufficient to repel potential English invasions and so Napoleon III ordered the construction of the present fort in 1859, and work was completed by 1866. The fort then served briefly as a prison for Communards in 1871. Although the fort ceased to be a military site in 1906, during World War I it held some 300 German and Austrian prisoners of war.  Today it is occupied by local fisherman and their families.

The sea showing its strength and power 🌊