Tunisia – Red Roo Is Back In Africa 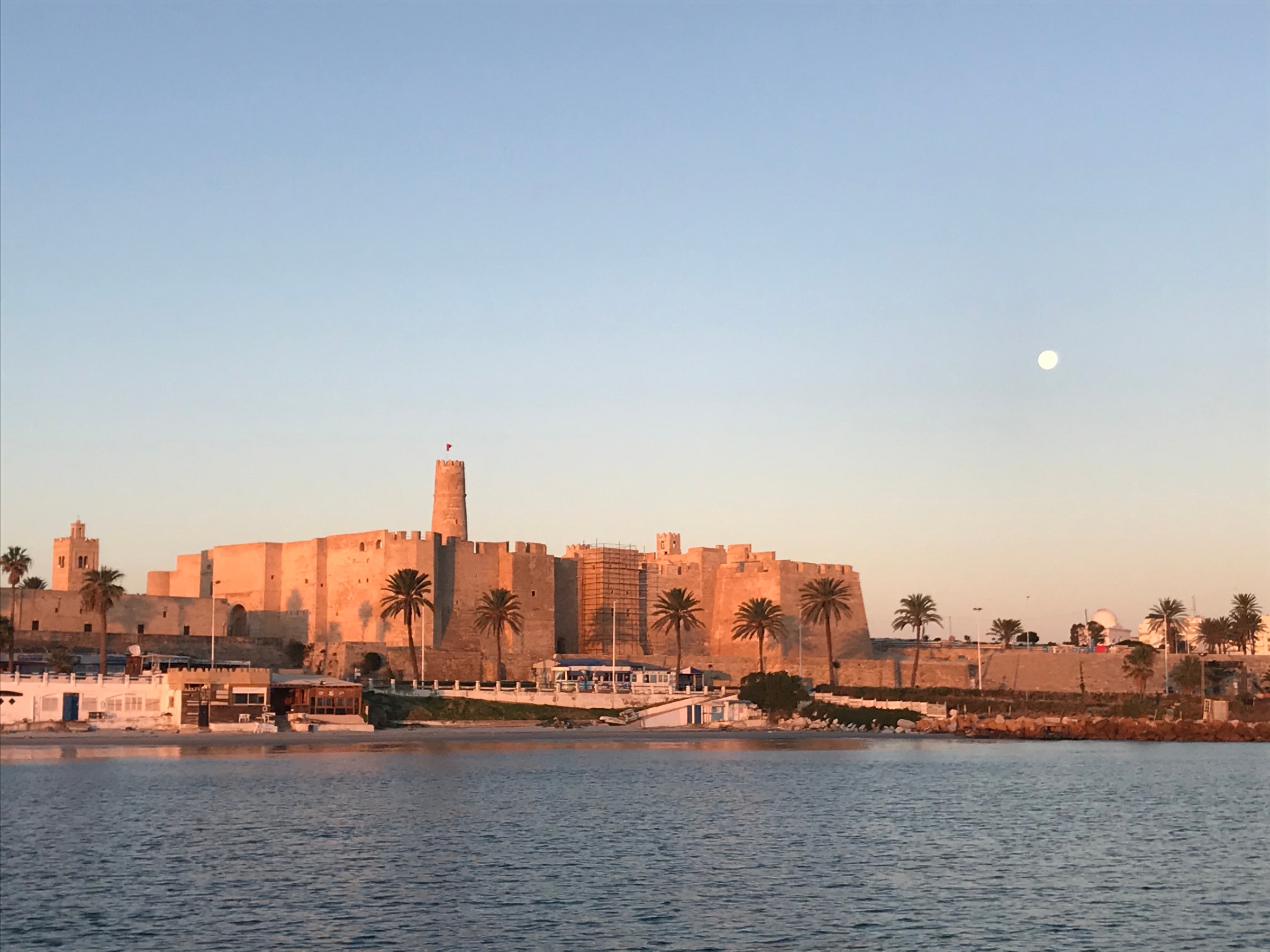 Arriving in Bizerte, Tunisia on the 15th December 2020, we really didn’t know what to expect as far as checking into a foreign country in these new Covid times.  To our pleasant surprise it was easy and we received a most warm and sincere welcome to Tunisia.

We tied the boat up at around 4pm and were instructed to stay on the boat. By 6pm we had a laboratory technician at the boat in full PPE (white paper overalls, gloves and mask) ready to shove a stick up our nose for a Covid test. The next morning the results were in – we had passed the test (and didn’t even have to study!). The officials then came on board one after the other; Customs, Port Police, Guard National, then finally the Marina all with paperwork to process us and the boat into the country.  Last to visit was the Government Doctor who assessed our Covid results, our previous travel and our health before determining that we would need to quarantine for 4 days, complete a second Covid test then (as long as we pass again) we would be fully cleared in and free to leave the boat and explore Tunisia.  We passed the second test too and for the benefit of those who haven’t been covid tested it doesn’t get easier the more you do, whilst it is painless it is anything but pleasant. We didn’t have it too bad however as we learnt that the poor technician who tested us has to complete a test at the end of every work day (due to his exposure risk in testing people all day everyday), he told us he has now had 321 tests …. ouch – I don’t think his nose will ever recover!!!

The 4 days confined to the boat in quarantine passed very quickly as we were certainly exhausted from our lively passage across from the Balearic Islands, so we took the time to recover, and enjoyed being plugged into power and water (no limits on consumption of these was welcome after 6 weeks of anchoring along the Spanish coast). Long hot showers, electricity for laptops/movies and cooking, water to hand wash our clothes (in a bucket) and plenty of food stores we were happy.

In total we spent two weeks in Bizerte, during this time we found our feet in regards to understanding the people, customs, language, money, food and the way of life in Tunisia. The Tunisians are very welcoming. This is one of the many pleasures we get to experience each time we land in a new country.

Whilst in the North of the country we took the opportunity to hire a car and see further afield than the city.

We toured a large aluminium boat building factory (Red Roo is aluminium) in Menzel Bourguiba owned and operated by our new friend Claude (a lovely Frenchman who had a 22 meter aluminium catamaran next to us in the marina).

We drove to Ichkeul National Park expecting to be able to get close to Flamingo’s only to get to the gate and be told the park was shut due to Covid.

On our travels we came across the Medjez-El-Bab Commonwealth War Cemetery, where 2903 Commonwealth Servicemen from the Second World War North Africa campaign (1942-1943) are buried or commemorated, 385 of which are unidentified. A very sombre place that is maintained to a very high standard by the local staff.

We stopped at Dougga, a Roman settlement that peaked around 400 AD. The ruins of the complete city cover an area of approximately 75 ha. It became a UNESCO site in 1997. We really enjoyed exploring this place, we were 2 of 4 people wandering the ruins and there is no such thing as out of bounds, guide ropes restricting access or even occupational health and safety in a place like this. You are truely free to roam and explore, even fall down open un barricaded holes in the structures, or pick up the stones from mosaics dated 1400 years old.

We visited Le Kef and toured the Rabat which overlooks the city, as well as drove through the cork forests and the Ayn Darahim Mountains on route to Tabarka, a northern coastal town. During our time on the road we passed some magnificent rich farming country with the winter crops emerging. Northern Tunisia was the breadbasket of the Roman Empire with an estimated 60% of the empires wheat coming from the region.

We were the only cruisers living on our boat at Bizerte so we enjoyed a quiet Christmas together.  We ate out at a restaurant for lunch (the one in town that sold alcohol – remember we are in an Arabic/Muslim country now and alcohol isn’t a common thing).  We treated ourselves to ½ a dozen oysters for an entree, only to be told they had just three oysters, however they were so big I am not sure we would have managed any more than that.  We strolled back to the boat and drank away the afternoon and evening making a good dent in our ships stores of grog – it was Christmas after all!!

Once the correct wind and weather arrived we set off again for the 145 nautical mile passage which took us east across the Gulf of Tunis, around Cape Bon and then south to our winter berth at Monastir.

We had a great sail making good speed in pleasant conditions (a relief after the previous passage). We left Bizerte and arrived in Monastir a little over 24 hours later, anchoring off the beach outside the marina.

The next morning we entered the marina (with a little touch of anxiety) for our first ever Mediterranean berth.  This may not mean much to many of you, but every region of the world has a different way of “parking” your boat, and we were about to learn yet another.  Previously we have become practiced and skilled in normal finger pontoon berths, then in the Baltic Sea we learnt to deploy a stern anchor and nose into the rocks or docks to tie off, we have also perfected the box berths or pile berths but of course they do it different here in the Med. We had done our research but it is always a bit “exciting” actually executing something new in a boat.  Especially when you have a great cruising boat for sailing and anchoring but one which isn’t quite as responsive on steering in small tight cramped marinas, or going backwards at low speed, which of course is what is required to berth here.  In short they don’t have pontoons (to side tie onto) you need to back into a berth in between other boats and tie off your stern (rear) to the quay, then pick up “slime lines” from the water that are secured underwater on the bottom (usually to concrete blocks) to tie off your bow.  Then secure a “plank” to get on and off your boat from the stern to the quay.  We managed this quite well (or some would say fluked it), but it was a relief getting the first one done, we now know what to expect next time.

We were welcomed in Monastir, arriving New Years Eve to be greeted by fantastic friends who we had previously met and wintered with in Morocco 2 years prior, and have since made many new ones too. Monastir has a great winter sailing community with around 20 boats all with people living on them from many countries; USA, Canada, Germany, France, Italy, Switzerland, Brazil, The Netherlands, as well as other Australians!

We will be here for a few months to wait out winter, haul out the boat and anti-foul the bottom and then be ready to head off sailing and exploring as the pandemic and weather allows.

← Off again ⛵️ into the mediterranean sea
Months Spent In Monastir →

4 Comments on “Tunisia – Red Roo Is Back In Africa”