Where those brave enough to be sailing West Coast of Ireland all met, Red Roo, Freja, SV Luskell & Alchemy.  Admittedly however brave we were, we had all gone into Dingle to shelter from a storm that was predicated to last a week.  Coming into Dingle we caught a bucket of mackerel (getting quite good at this now) which later fed the crews on board Freja and SV Luskell, but quickly pulled in the line once Fungi the local marina dolphin came out to greet us in the river and escort us in.  No way was I going to be the one who hooked Fungi on my fishing line!!  Turns out Fungi is a celebrity and people come from all over Ireland to visit him, the moment you mention Dingle the name Fungi is always spoken straight back to you in the next sentence anywhere in Ireland.  He is very friendly and greets every boat, he almost gave Tony from Freja a big wet kiss as he looked over the side to see him only for Fungi to jump out of the water and say hello.

First day we were all busy settling in, washing, restocking with food (first good supermarket we had seen since Kinsale a couple of weeks ago). A day later Tony and Phil decided they must do something useful with their time and proceeded on a mission to have a drink in as many pubs as possible. As well as Fungi, Dingle is known for its pubs with a ratio of 1 pub for every 26 residents in the town (38 pubs and population of 988).  The pubs also traditionally doubled as other businesses, one being a pub/shoe/leather shop, another being a pub/haberdashery/clothes shop, the next and according to the blokes the best one being a pub/hardware store – the only place you can buy a hammer and get hammered!!!

On the Saturday we found a pub (whose sole business was being a pub) to watch the rugby in and much to Tony and Jenny’s delight England beat Australia quite easily. 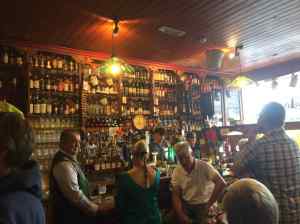 With the weather not improving Tony and Jenny parked Freja up and headed home to England (they would come back in a month or so and continue on), Alchemy and crew had family visit from England, SV Luskell hunkered down to wait and Phil and I hired a car and decided to take 4 days to drive inland (actually, all the way to the Eastern side) and to visit the capital Dublin, and Kilkenny, Limerick and the lake district on the way/way back.  Dublin was underwhelming and we spent half a day wandering the streets before deciding we had “been there – seen it” and would be much happier exploring the smaller regional towns inland and proceeded to do so.  Keeping an eye on the weather whilst travelling we cut the trip short by one day and returned to Red Roo as a potential window to sail on north had opened up and we were going to use it.  So Luskell and Red Roo set off in the one day window to continue north before the weather was due to close in again for another couple of days.

Pictures below from our inland adventures: