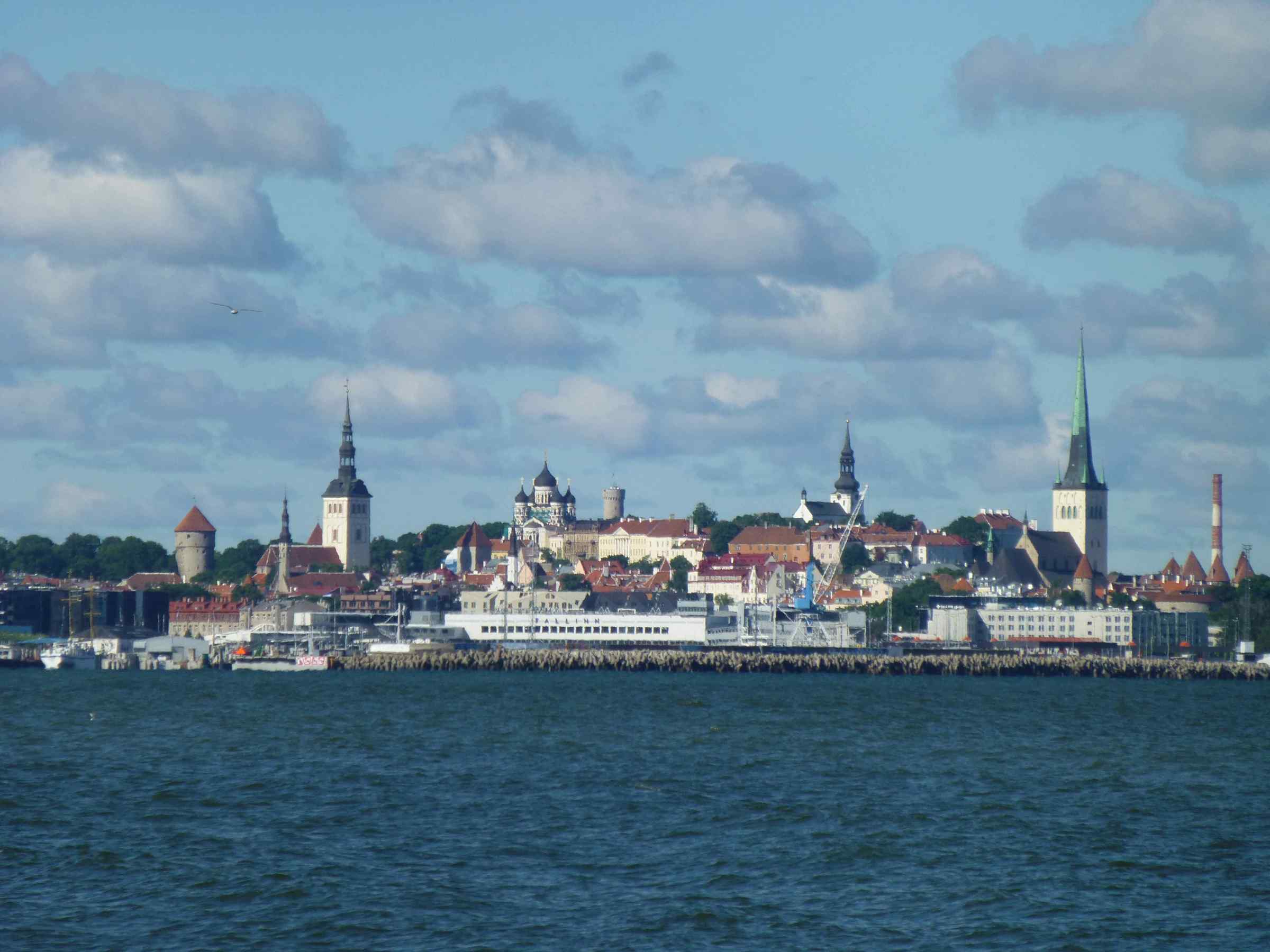 Maree returned to Red Roo in Tallinn – Estonia (many, many, many thanks to Pat, Sam, Honey, Clare, Wendy and Michael in the UK who made me welcome whilst waiting to return to the boat).  So we are now back on track to continue our summer exploring the Baltic Sea.

I was greeted at the airport by Phil holding a small sticky note with my nickname on it as he stood smiling amongst the offical chauffeurs with whiteboards containing passenger names – most amusing! 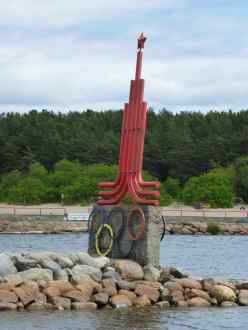 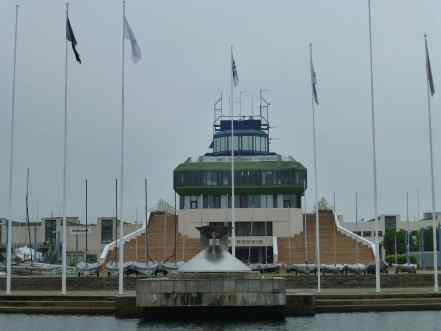 Red Roo was berthed in the Pirita Marina home of the 1980 Moscow (Russian) Olympic sailing events.  Russia I hear you say . . . aren’t you in Estonia . . . yes we are.   Let me attempt to break it down for you (very briefly).

For centuries Estonia has been a battleground with Denmark, Germany, Russia, Sweeden and Poland all fighting many wars for the all important geographical position of Estonia as a gateway between East and West.

Around 1227 Estonia was conquered and ruled by Denmark.

From 1418 to 1562 Estonia formed part of the Livonia Confederation and all was well until the Livonia War of 1558 – 1583 after which Estonia then became part of the Swedish empire.  This lasted until 1721 when the Swedish ceded it to Russia as a result of the Great Northern War.

In the aftermath of World War I (1914-1918) and the Russian revolutions of 1917, Estonia  declared independence in Feb 1918, they had fought off the Russians to the east and Germans to the south, however this was not to last.

During world war II Estonia was then occupied by by the Soviet Union in 1940 and by Nazi Germany a year later and then yet again by the Soviets in 1944.

Skip forward another forty years to 1988 during the “singing revolution” the Estonian Sovereignty Declaration was issued in defiance of Soviet rule and independence was finally restored on 20th August 1991 (not really so very long ago), and happy to say this continues until this day.

So, that explains how we are in Estonia the home of the Russian Olympic Sailing events as in 1980 Estonia was under Russian rule.

I mentioned above the “singing revolution” and this is something that really makes me smile.  It is the name given to the events between 1987 – 1991 that lead to the restoration of independence to Estonia. The events were MASSES (300,000+) of Estoinans in Tallinn singing national songs and hymns that were forbidden during soviet occupation. How is that for a peaceful way rather than fighting a war.

This also leads into the “The Baltic Way or the Baltic Chain” which again was a peaceful political demonstration where in 1989 approximately TWO MILLION people joined hands to form a human chain spanning 675.5 km across three Baltic States – Estonia, Latvia & Lithuania. So Good!!  Singing is still very, very big in the country and no wonder.  We visited the Estonian Sound Shell in Tallinn which you can imagine  is much loved and treasured by the people and very beautiful.

Whilst we were staying in the Olympic Marina at the Kalev Jahtklubi (love the Yacht Club spelling) it was hosting the 41st Spinnaker Regatta.   It was optimist class dingy sailors (they are the teeny weeny little boats that are very light, fast and unstable).  The name is easy to remember as you would be optimistic if you thought you wouldn’t fall in when trying to sail one!  Anyway, it was fantastic to watch them coming and going,  as it was for young sailors – all 229 of them (all under 13 years of age at a guess) and no doubt the best of the best, future Olympians I am sure.  Countries represented were; Estonia, Finland, Sweden, Russia, Belarus, Latvia, Lithuania and Turkey.  We even spotted one wearing a life jacket with an Australian flag and “Australian Sailing Team” printed on it, however he was from Turkey and he told us he swapped life jackets last year when he was down under sailing in the world championships in Adelaide Australia!!

A few more Estonian facts for you, with a population of 1.3 million (consisting of 65% Estonians and over 25% Russians as well as some others to make up the numbers) it is one of the least populous Baltic States.  Phil was astounded to learn in the Guild Hall Museum that in 2009 over 60% of the countries births were born out of wedlock!  Outrageous!! (I am not sure how that figure compares to other countries).  Also for those interested the land size is 350 km East to West & 240 km North to South.

Anyway we had a great couple of days exploring Tallinn, the new city is exactly as most modern city are …. ugly, tall, grey and busy however the old city still within many of the original city walls is magnificent.  Steep cobblestone streets, amazing buildings and stunning views.  The city had endless museums, more than we have ever encountered before, but lucky for me Phil knows everything so was able to brief me on all I needed to know without having to spend days in the museums. 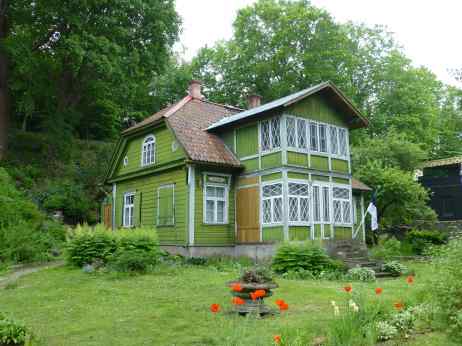 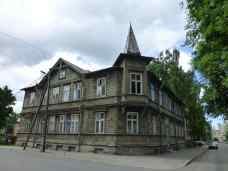 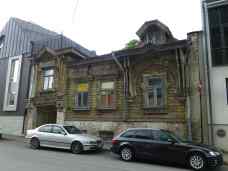 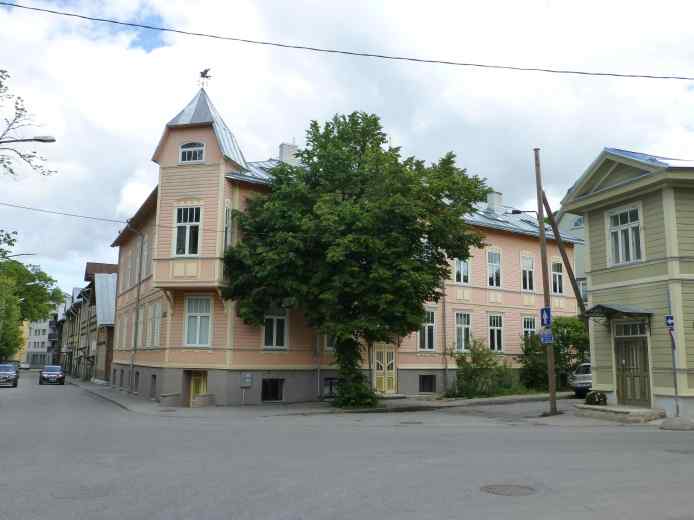 Wooden houses of every colour and shape 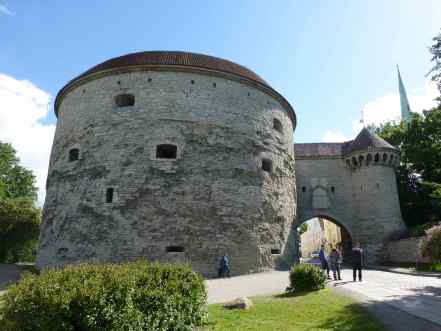 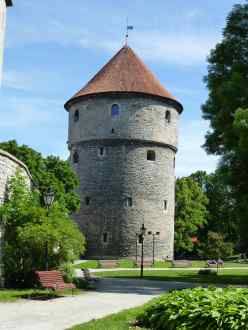 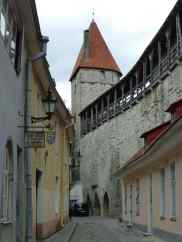 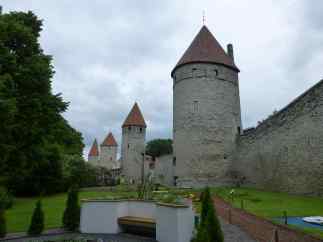 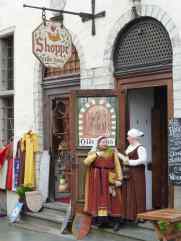 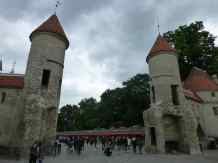 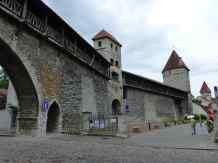 Rob and Jo from Cyclone of Langstone also arrived in Tallinn while we were there and it was fantastic to have a last hoorah with them before they headed back home (Tallinn being their furtherest point for this season) and we continued onto Finland.  They were lucky enough to also be given a “Phil’s Special Cycling Tour” from the Marina into the old city, as well as enjoying a last supper with them on Red Roo during their stay, then a departing shot of Russian Vodka onboard Cyclone the night before they left ….. yes any excuse for a few drinks.