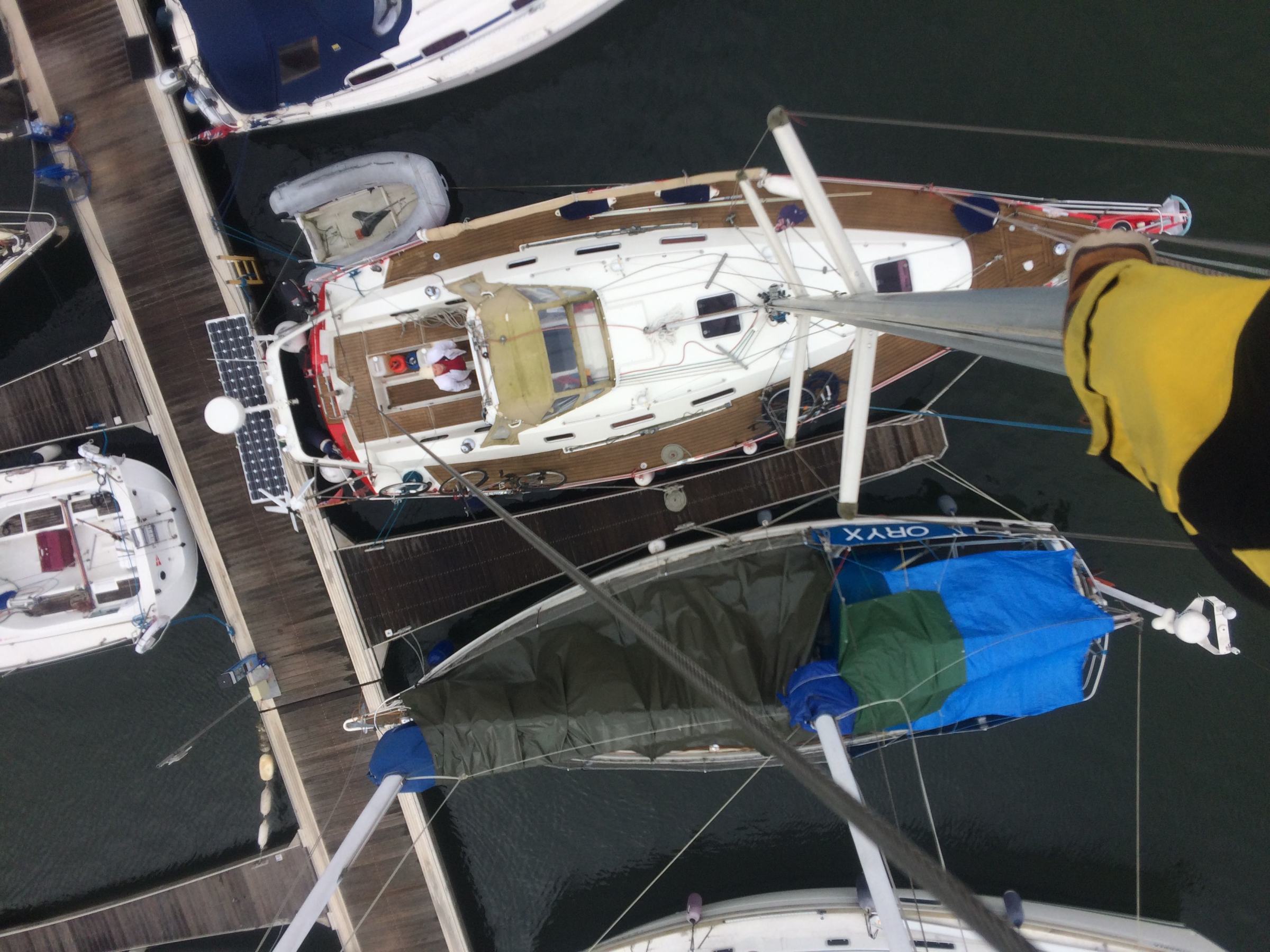 Well it certainly isn’t all beaches and bikini’s living on a yacht, certainly not this far north thats for sure.  It has been a long, cold, wet, white and expensive off season for us.

We arrived back in the UK on December 19, having crossed the North Sea from The Netherlands to Ipswich, up the River Orwell in Suffolk.  A good crossing considering the season and time of the year.  It was later than we had planned on returning but had been waiting for a good weather window to cross. Luckily we arrived just in time for the annual (our second) “J” Pontoon Christmas Party on Trimilia with great friends from the Marina (having stayed in contact all year) who even managed to keep our exact berth on J pontoon free for us to fill for the winter. Great to be back amongst friends!

After sobering up from the party, doing some much needed domestic duties cleaning up inside and outside of Red Roo, including quite a few loads of washing, a trip to the supermarket and working some magic in the galley to contribute to the festive feast we were ready for Christmas.

It was absolutely fantastic to be able to spend another Christmas and then Easter with Phil’s Suffolk family, consisting of Pat (Auntie) and cousins Sam, Clare & Andy, Alex and all the children (more like young adults) Oliver, Annabel, William, Christopher, Melissa, Katie.  A huge thanks to the Youngman/Anderson family including Edward, Alice & David and also once again to  Pat for hosting and housing us over the Christmas period (yes it took 2 official Christmas celebrations to get around everyone – no complaints from us, a very merry Christmas was had twice).  Not sure we will ever be able to repay the hospitably that has been bestowed upon us both last year and this year when we have stopped in Suffolk.

Pat, Clare and families have been so very kind, inclusive and accomodating. Indeed we wouldn’t have been able to travel as easily as we have for the last 2.5 years without having our home base here and an address at Hollesley.  Thank You Pat xx

Things came to a grinding halt for us after returning to the boat on the eve of new years eve feeling utterly exhausted and then woke the next morning with the symptoms of the dreaded “Aussie Flu”.  We went down hill from there quickly, we ached like we have never ached before, we coughed up lungs and other vile fluid, we wheezed and rattled and we had temperatures followed by cold shivers – but we survived.  It took us well over a week to be able to function normally and another two weeks before we were really back to normal.

It seemed January was well underway by the time we started really getting into some of the many boat jobs planned for the winter, and as soon as we got right into them it was time for Phil to take off on a 10 day jaunt to France to catch up with Richard a mate from Australia.  A good time was had by all (including myself who had 10 days of peace and space on the boat to knock over a lot of my jobs).  Richard and Phil were looked after fantastically by friends of Richard & Heather namely Roseline & Andre in Elbeuf as well as Pierre & Isabel in Granville who gave them a bed, many delicious french meals and loads of liquid hospitality, including many afternoon aperitifs (which may have become a bit of a habit he is still trying to break).

Winter has put in an especially good season this year, with continual wet and cold days which even led to a significant snow event named “the beast from the east” which hit with force leaving a white blanket over everything in site as well as upsetting most of the country with cancelled transports from buses, train and planes.  We have had two white outs, one lasting 4 days the other only 2.  And news from friends in the Netherlands reported to us that the canals we were sailing on two months ago, were now iced over and locals were skating on them! 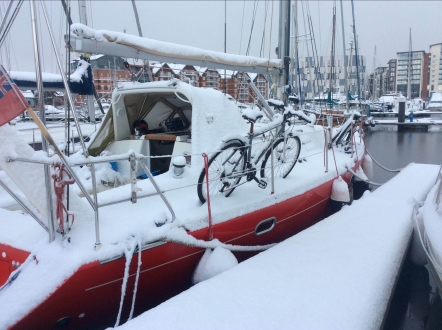 With the weather not suitable for outside jobs, and travel even locally at a stand still we realised many of the marina residents were sick of being boat bound and we therefore put on a bit of an impromptu pub quiz night at the yacht club building.  It was a great success with almost 30 people turning up and 5 teams battling it out for bragging rights on the night.  It was heaps of fun, a big thanks to all who turned up and made it a great night.  Some late night shenanigans afterwards resulting in a ripper snowball fight!

We have certainly had a very social winter catching up with everyone from last winter in marina and with new friends Kris and David (Aussies on Taipan) and John, Kara & Dean (American’s on Sentijn) all being here in the harbour together, we have traded tools, shared many meals (and quite a few drinks – both hot and cold), loads of story’s and many, many good times. One of the highlights being Dean’s 1st birthday with a party which we celebrated in the yacht club. He was the only attendee under age and the only one to go home sober!

Anyone interested in a great book to read should check our Johns book, a real life adventure story of John & Kara’s world circumnavigation in their 20’s in a boat with no previous sailing experience, a fantastic read (and not just for sailors).  It is available on Amazon and Kindle. Link Here.

We also got away for a few days mid March to travel down south to visit Wendy and Mike (Phil’s cousins) at St Meryn – Cornwall.  Knowing when we depart the UK this time (if all goes to plan) we won’t be back in the boat so we wanted to see them again before departing.  We have previously taken the boat to Cornwall and Padstow in May 2016 so it was great to spend time with the Cornwall cousins again.  We spent a day in Padstow (Red Roo’s registered home port) which is currently closed while they replace the harbour gates.  Michael and Wendy were again so very generous with their time and wonderful hosts.  We had a day out to Plymouth to visit Karen, a meal with Mark, Carolyn and Victoria as well as another day trip to Cape Cornwall and Penzance where we ate lunch overlooking St Michaels Mount – but all we could see was white waves and swell with torrential rain and low visibility the mount wasn’t on display that day.

On the return journey we stopped at the “sticky out point” (Phil’s description) which is actually Portland the island off Weymouth to pick up our Jordan Series Drogue. A significant investment in survival gear that we hope to never use. We also visited Rob, Jo & Alexa at Hayling Island near Portsmouth.  Having met Rob and Jo on their boat Cyclone of Langstone during the year in the Baltic it was great to see them again and we had a fantastic (sunny) day exploring their patch of the world.  However when we woke up to snow it was a sign to return to home to the boat (seems to be a common theme this year).

It hasn’t been all snow days and holidays however we have managed to knock over a few big jobs and spend a lot of cash setting up for the bigger voyages planned in the next year or so.

Jobs to name a few included a full service of the head (a nice word for the boat toilet), find and repair a leak in the fridge circuit, sand back and varnish the head (bathroom/shower) wooden floor, design and arrange a custom manufacture of transom mounts for the storm drogue (which we never hope to use), advertising and selling 2 years worth of charts and pilot books that we have collected so far covering 11 of the countries we have already visited (so we can buy the the next lot we need for waters south of here), design and build a fuel polishing circuit for the 2 x fuel tanks, repair a crack in the boom where is connects to the boom-vang, investigate our battery charge issue which ended up with replacing the batteries, cleaning of all the lines (ropes) many of which had turned green with mould in the winter conditions, a couple of scrubs of the boat, inside and out (after each snow event), scrub the hull and water line, clean, detail and resewing seams of the canvas work on the boat (dodgers, spray hood & sail bag cover), including the recovery of the dodger from the bottom of the harbour when it blew in and sunk 7 meters down!

As well as buying the drogue we have boosted the UK economy by investing in a bigger new 33kg Rocna anchor (we will certainly stick to the bottom with this baby), a new main sail and also had 5 other sails serviced (inspected, cleaned, repaired & reinforced), purchased a portable industrial sewing machine (so we can do more work ourselves and Phil also plans on pimping out me and my machine to make a bit of money) and finally we are also in the market for a new life raft before we leave.  My pocket hurts just thinking about it all. 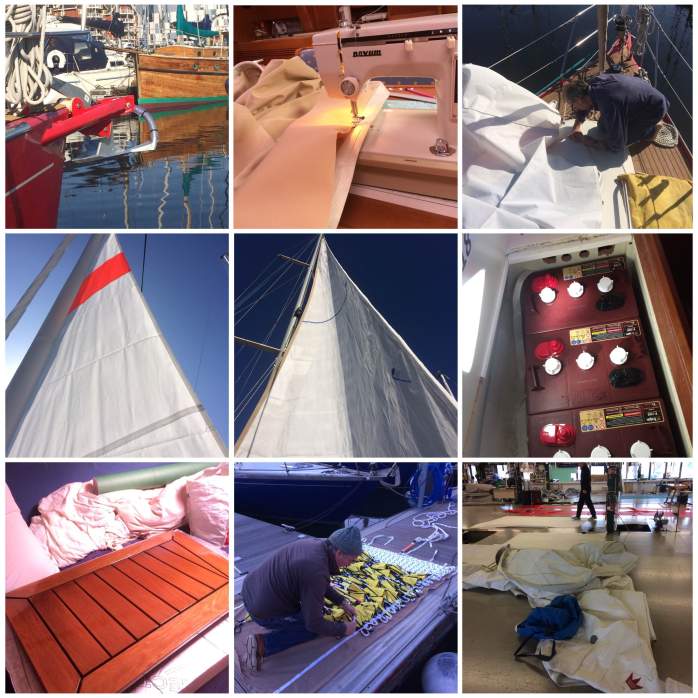 After all that it is almost time to leave again for new exciting shores.  This is the longest we have ever stopped and although it is hard saying farewell to our UK family and friends the sea is calling us.

We must go down to the seas again, lets escape this bloody place,
Where at night we’re advised: you should carry a can of mace;
And the rain falls, and the sleet falls, and the snow is black with soot
And the nearest grocery store is a long wet haul on foot!

We must go down to the seas again, the New Cuts grown quite old,
For the boat’s quite thoroughly infested with mould;
And the pipes freeze while laundry costs four quid a token
And the internet is slow, whenever it’s not completely broken!

We must go down to the sea again, from this wretched town we’ll fly
What’s kept us sane was the LIDL box and a piece of Maree’s fish pie:
And on “K” dock on the icy nights we hear a plaintiff wailing
And a frantic call and a desperate call – Taipan’s Dutch heater is failing!

We must go down to the seas again, to greener pastures we’ll sail,
To cheaper booze and warmer climes, where there’s no chance of hail;
But what we’ll treasure are the times with each laughing fellow rover,
Because after a dozen gallons of wine, the Ipswich winters finally over!

Based on Sea Fever by John Masefield, adapted for Sentijn, Taipan and Red Roo in Ipswich by John & Kara

9 Comments on “Waiting out Winter”