Having been in Spain for just over 3 weeks now its been a real mixed bag, we have had uncomfortable large sloppy swell, flat calm seas, amazing rocky steep hilly shorelines, flat white stunning sandy beaches, plenty of fresh fish caught from the boat, hot sunny days and damp dewy wet nights, as well as some wonderful food, Spanish tapas!  But best of all we have been enjoying Spain and all it has to offer with great cruising companions, drinking buddies, and fellow beach bums onboard Taipan & Sentijn.

After our crossing of the Bay of Biscay there was no rest.  Having arrived at 9am after two days and two nights crossing we spent the whole day exploring Gijón then left at 7am the following morning (mainly due to the very expensive price of the marina) and headed west on a 70 nautical mile passage in large uncomfortable swell … sigh … it was rather depressing and I admit to sending a message to fellow adventurers on Taipan who were also on the same passage expressing my “absolute ‘over-ness’ of the sloppy sea state and uncomfortable passage” to which I got a firm agreement in reply.  But we all knew it was likely to be less than ideal swell for the next few passages until we reached the western point and were actually out of the bay of Biscay and on the Atlantic coast.

We did the miles and finally arrived in the calm waters of Ribadeo, where we anchored and spent two nights recovering (from both the Biscay crossing and that days journey) and exploring.

Next passage was a short 22 nautical miles along to the Puerto Alumina Española which was a lovely anchorage even with the aluminium smelter as a back drop, the water was crystal clear with fish constantly rising, as well as one whale (me) enjoying the refreshing waters.

A couple of shorter legs then to the bays of Cariño and Cedeira, then onto Ria de Ferrol where we anchored at the foot of the San Filepe Fortress, a lovely backdrop and a great place to explore.

Arriving at Sada and the waters had finally warmed enough for the Captain to join me swimming!

We gave the waterline another clean (3 years since she had anti-foul applied and we are constantly scrubbing, attempting to get a bit longer and a bit further).

We also took a bus, which was driven by a want-a-be race car driver from Sada to visit Betanzos, a well preserved old town in Galicia with Kris & David (Taipan) as well as our new Dutch friends Jacob & Anneke (from SV Kim).

A Coruña was our next stop, where we spent two nights in the marina and then 2 more anchored off the beach.  Our reason for stopping and going into a marina was to get the boat computer (used for navigation) repaired as it had recently stopped working.  It was a huge relief to be able to get it repaired rather than have to get a new computer, and an additional bonus that we didn’t loose any data from it and got it turned around and back to us within a day.  Once repaired it took a few more frustrating hours (pretty much my whole day) with crap internet connection (typical of most marinas) to get the navigation software reinstalled, back up and running and all was once again well in the world.

We spent the second day in A Coruña sightseeing with a trip out to see the Tower of Hercules the worlds oldest working Roman lighthouse built in the 2nd century and restored towards the end of the 18th century.  It stands on the coast proudly 55 meters tall. 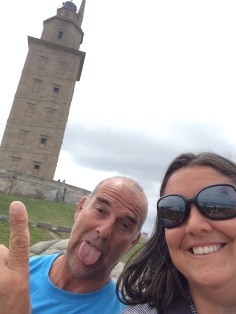 It was also the weekend of the Spanish Medieval Festival in the old town and we spent hours wandering the narrow cobblestone streets enjoying the atmosphere and looking at all the market and food stalls. 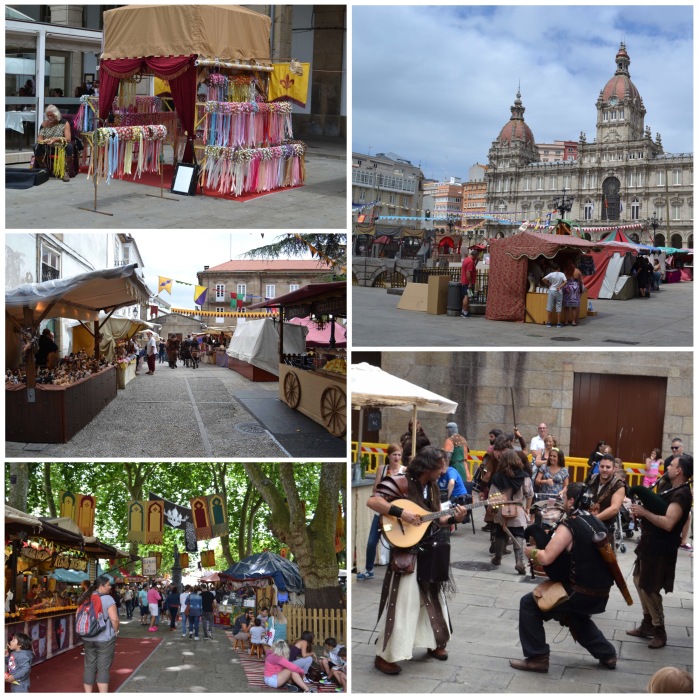 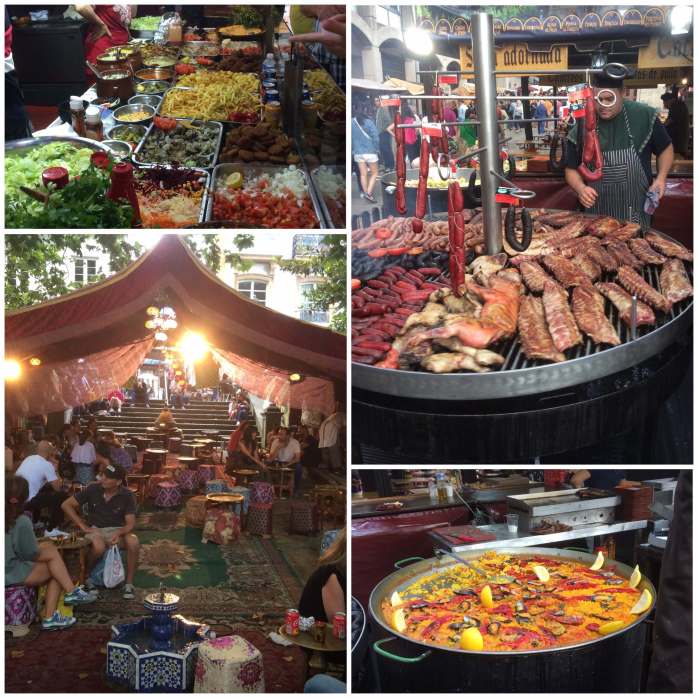 We rejoined Taipan in Muros along with John, Kara and Dean the crew of Sentijn our wonderful American friends we met in the UK over winter who had recently arrived in Spain from the Republic of Ireland.

We took another inland journey, with a 2 hour bus ride from Muros to Santiago de Compostela to see the cathedral housing the tomb of St. James at the end of the famous camino pilgrim trail.

The Camino de Santiago (the Way of St. James) is a large network of ancient pilgrim routes stretching across Europe and coming together at the tomb of St. James (Santiago in Spanish) in Santiago de Compostela in north-west Spain.  Yearly, hundreds of thousands of people of various backgrounds walk the Camino de Santiago either on their own or in organized groups.

During the middle ages, people walked out of their front doors and started off to Santiago. Some people set out on the Camino for spiritual reasons; many others find spiritual reasons along the Way as they meet other pilgrims, attend pilgrim masses in churches and monasteries and cathedrals, and see the large infrastructure of buildings provided for pilgrims over many centuries.  We however just went for a look, being so close we felt we shouldn’t miss it.  We didn’t find any divine inspiration but enjoyed the day out and witnessed many a sore feet finish their pilgrimage on an emotional high in the courtyard in front of the church. Those who walked the full trail had just completed a massive 780 km (nearly 500 miles) walk.

The Ria’s (the Spanish word for estuary) in this area are absolutely fantastic, heaps of bays and beaches to anchor in and enjoy the sunshine and the crystal clear water.

We anchored in two different locations in Ria de Muros e Noia and two others in the next Ria de Arousa at Ribeira and Illote Guidoiro Areoso, enjoying days on the beaches with Sentijn & Taipan as well as beach picnic dinners and evenings once the day trippers in the motor boats leave and we have the whole place to ourselves – magic.  I hope the summer continues for a good while longer as we travel further south.