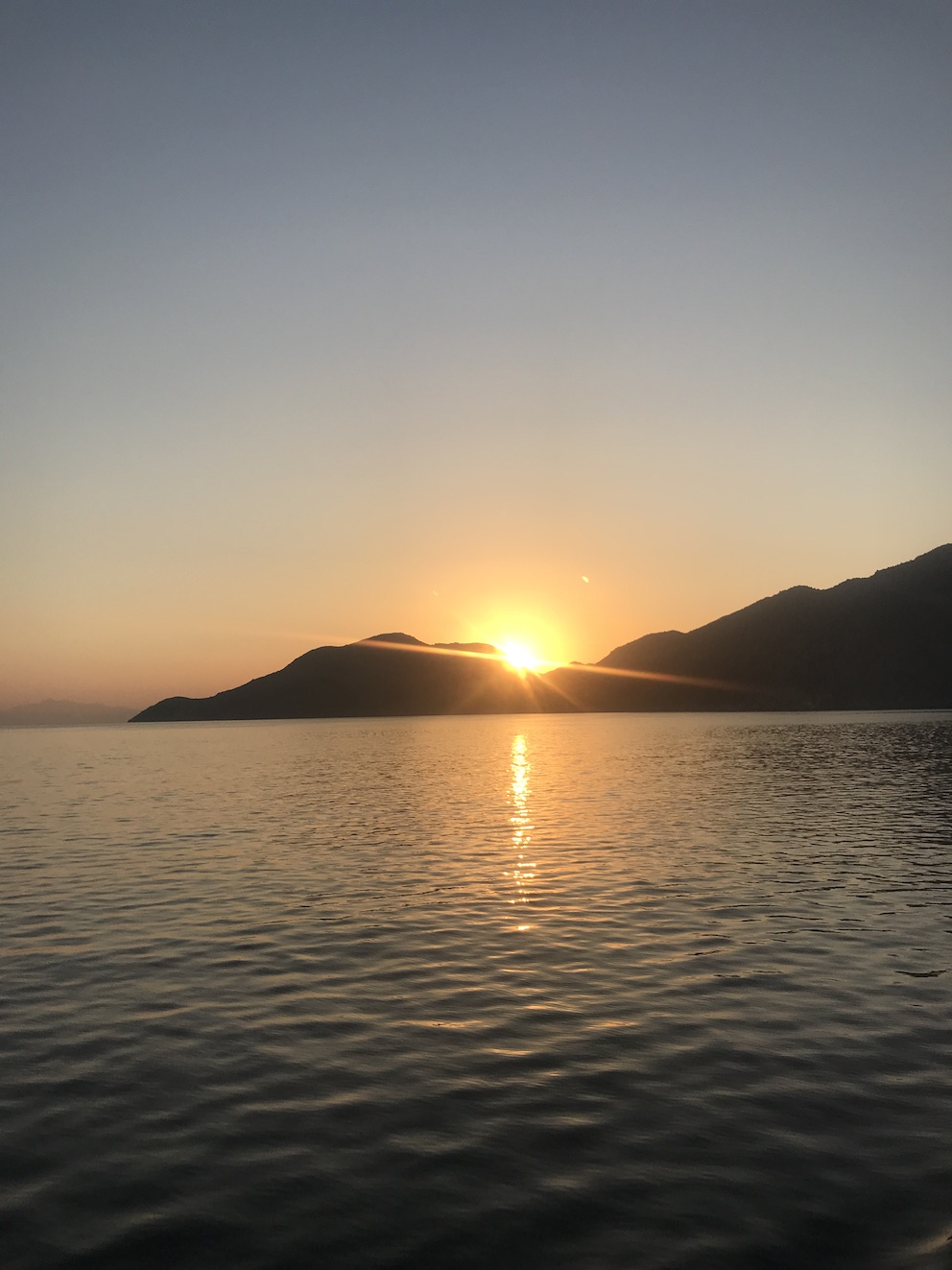 We were in our final 10 days in Greece, and can actually visually see Turkey, it appears easily within eyesight on the horizon as a prominent grey hill shape – we are so close.  It makes me want to go now, but the Captain holds me back, just a few more stops in Greece then we go to Turkey.

From the island of Amorgos it is a 40 nautical mile sail to our next destination the island of Astypalaia (which turns out to be a little hard to get my younger around so I refer to it as butterfly island as it is shaped like a butterfly).  That’s about 8 hours on the water and overall it was a pretty good passage, we did have to tick the engine over for 2.5 hours of the trip due to no wind but for the majority of the sail we were doing over 6 knots in in 10-12 knots of wind – most pleasant.  We had another successful day on the water in terms of fishing with Phil winding in two lovely size bonito fish – that’s dinner for the next two days sorted.

Upon arrival in Astypalaia we decided to secure the boat to the town quay as some more decent consistent winds were forecast for the next 3 days.  This meant we had to use the “med mooring” method of docking which we hadn’t done before.  Med mooring involves lining the boats stern up perpendicular to the dock as far out as possible (meaning a good 3 – 4 boat lengths away), dropping the anchor and reversing into the dock.  Whilst reversing we are laying out anchor chain, and about half way there stopping the chain to ensure the anchor has “dug in” on the bottom (which means the boat will stop), then once satisfied the anchor has set, continue to feed out chain whilst simultaneously reversing.  Once we get close to the dock we have to feed out enough chain to get close enough to throw a line to secure the stern to shore but not too much to allow the boat to hit the dock.  It is a manoeuvre which is pretty easy to do with three people on the boat, but a little hectic with just the two.  Ideally you would have one on the boat controls (steering and throttle), one on the anchor, and one to throw the lines to tie off as well as fend off any potential bumps with the boats you are pulling along side of.  With just the two of us, Phil is at the helm, and I do the anchor, anchor chain, fending and lines.

It all went to plan and we tied up without any trouble.  Some of the risks around berthing like this is the possibility of tangling anchors with other boats.  If we or another boat don’t line up correctly or get blown off a little by the wind when dropping anchor, it is easy to lay your anchor or chain over someone else’s which can be really quite bad depending if the boat leaves before you and pulls up your anchor and you are not on the boat and the boat is then able to pull back and smash into the concrete dock … living on a boat, there is always something to worry about.  Anyway Phil dived on the anchor to triple check it was sunk well and lined up and not tangled with anything.  We also stayed on the boat until other boats were either side of us and made sure they didn’t dislodge our anchor. Four (4) years ago when we were sailing in Scandinavia we used to dock the boat similar to this but almost in reverse.  Instead of reversing in we would drop a stern anchor (off the back of the boat) and ensure it grabbed before taking the boat in nose first and securing it to rocks or the dock, so the same but different.

We spent three days on the island, and enjoyed the peacefulness of it.  We of course walked up hills and lots and lots of steps to visit the sites, the windmills and the old castle, it was obviously that tourist season was well and truely over and things were a lot calmer than we had previously experienced in some of the Greek islands.  It was also really great to be on the dock with a couple of Kiwis who we meet and immediately be-friended.  Turns out they are taking a very similar journey to us to get to Turkey and will also be stoping for winter at the same place.  Great to make new friends.

We departed Butterly Island early as soon as it was light enough to see what we were doing leaving the dock in order to sail the 54 nautical miles to Tilos.  This took us all day 06:30 – 17:30 and it was a half / half kind of day, with 6 hours good sailing and 5 hours having to be done under engine.  As we were approaching Tilos we noticed another boat nearby with an Australian flag and hailed them on the radio.  It was Debbie and Paul (more new friends) and they were going to Tilos also and once confirming we were all vaccinated we arranged to meet up and have a drink with them later – great to hang out with people who speak our Aussie language.

The bay of Tilos was a lovely large bay with plenty of room to anchor and just the two boats.  We had two very quiet days and nights here with no wind at all, so flat calm and tranquil.

From Tilos it was a short 24 nautical miles to the bottom (south) end of Symi where we would stop just the one night before sailing onto the island of Rhodes the next day.  This bay of Symi called Panormitis is a Monastery and a very impressive large flash one at that!  We had read you need to be dressed respectfully to visit so we both wore long pants and long sleeves for the first time this year since leaving our winter berth of Tunisia.

The next morning was another 24 nautical miles from Symi to Rhodes, one of the biggest islands in Greece.  It took us 5 ½ hours and involved many many sail changes.  Gennaker up as it was light winds directly downwind, tack the boat as the wind had just shifted a little to the other side, motor for half an hour as the wind dropped, wind came back, so back out with the Gennaker, wind increased so put away the Gennaker and put out the Genoa (smaller, but heavier sail for higher winds), wind dropped off so put away the Genoa and back out with the Gennaker!  And on and on it goes.  However the good news is, we sailed all but 30 minutes of the 5.5 hour trip.

We anchored off the beach just a little behind the old and new towns of the island on the north east end.  We spent the next day exploring the old town, which was impressive, and larger than we were expecting, and to top it off double moated!!  We learnt that the Knights of St John (whom you may recall we talked of in Malta) used to be in Rhodes and were responsible for the construction of this place before leaving (being expelled following a siege by the Ottomans  in 1522) and resettling in Malta. After the old town we hunted in the new town for a few items we had on our buy list without a lot of success.  The following day was spent re provisioning at Lidl in preparation for Turkey.  We were stocking up on beer & wine & pork products.  Lidl was nearby and we did two trips and Red Roo is full of goodies to get us through the winter in a country that doesn’t eat pork and where alcohol is expensive.

Just one more stop before Turkey, it was back to Symi but this time to the north of the island to the main town in order to complete all the formalities of checking out of the country and the EU.  It was 26 nautical miles (5 hours) without a breath of wind, so a motor all the way.  We had been warned of the “unique” set up of berthing in Symi Harbour with what was described to us as the local Mafia running the mooring buoys.  In the harbour there are mooring buoys to tie your bow to then you reverse to the dock and tie off your stern (the buoys are instead of having to drop your anchor – much better in our opinion).  Anyway the “guys” come out and help you tie to the buoy and dock then charge you €25 euro for doing so (nearly $40 australian dollars).  This cost is not in anyway associated to the fees involved in staying on the dock.  Once you are docked the Harbour Master comes for the harbour fee of €13 euro’s so its cheaper to stay on the dock for 24 hours than it is for 4 minutes assistance to tie your boat up.  We declined the “Mafias” help and picked up the buoy ourselves (and made ourselves very unpopular in the process – with words being directed at us along the lines of, “I need the money to feed my family”).

Anyway, Symi is lovely.  A really sweet small inlet harbour with colourful village on the hillside, with evidence of its Italian heritage in the architecture.  We enjoyed two days here and were there for the Greek national holiday “No Day” where back in 1940 the Greek Prime Minister said “No” to the Italian dictator Benito Mussolini who wanted to his forces to enter Greek territory and occupy strategic locations. We watched the ceremony and parade and then walked to the top of the village to get some pictures.

A highlight of Symi for Phil was the ability to order his dinner and have it delivered without leaving the boat.  We were tied to the dock in front of a Taverna and the waiter would often talk to us.  So come dinner time on our first evening Phil stood on the back of the boat and asked her for a gyros, 5 minutes later she brought it to the boat – at a cost of €2.50 he was one happy man.

All that was left was to formally check out of Greece and the EU.  We completed formalities at Symi with the Police who stamped our passports and handed in our Cruising Permit and Log Book to the Port Police, we were free to leave.

As the sun was coming up on Friday 29th October Red Roo left Symi for Datca Turkey, a short 2.5 hour trip (we could see Turkey the whole time).

As we wrap up 933 nautical miles, 45 stops and 3 months in Greece – we leave with wonderful memories.

← Boat Life – Fabulous or Frightening?
To Turkey in Two Hours →