Hold onto your hat . . . I am not kidding when I tell you beer testing it’s an actual job!!  Yes it’s really true and we met two gents who fulfil that role out on this stunning little island on the west coast of Ireland.  The gents in question (pictured below) work for Carlsberg in a “quality control”role, their job being to travel to pubs whom stock their products (in the company provided car) and taste test and temperature measure the beers they serve from tap to ensure they are served as intended from the brewer!!!  As nice as these guys were, we hated them, really hated them – how do you get a gig like that??  With some friendly banter and Aussie stirring they were soon sledging back saying we can’t complain as we currently don’t work and are sailing around the world on our yacht – we surrendered that point to them.

Listening to the above conversation and joining in to agree that these two blokes had a pretty darn great job was an Irish couple whom we went on to learn worked on Yacht Ahimsa, only a super yacht at the time it was launched holding the record for the worlds tallest mast!!! (click on the name to see pictures/videos of this incredible vessel).  And furthermore when I say work on yacht Fabien is actually the Captain, Captain Fabian as his business card says.  Yes that’s right Skipper and his lovely partner also crew onboard.   My gosh did we have career envy from people we met here at Inishboffin! Fabian was very kind and had been checking out Red Roo tied to the wall near the pub whilst we had been walking, seems he was very impressed with our little floating home and yacht and even was kind enough to say he wants something for himself very similar one day (I am sure in the mean time he is happy enough to live onboard Ahimsa.  He pointed out he is Captain and not the owner).   The boat was currently in America and they were home on holidays.

Seems Inishbofin is the place to be.  The island comes alive during the day with the boat loads of tourists brought over from the mainland but returns to peaceful serenity when they depart later in the day to return home.  There are only a limited numbers of guest houses and accommodation options so not so many around come sunset and the evenings.  A very popular spot for scuba diving and fishing charters and even though we all know I am a huge scuba fan and do it at any opportunity I couldn’t muster the courage to entertain the thought – the water was freezing!!!

We walked the islands circumference and climbed to its highest point which to spoil the moment had the biggest radio tower and aerials one can imagine on top.   Lots of sheep wandering the island and not a lot of paddocks or fences but went on to learn that the sheep are all tagged so they know which ones belong to whom (each family having a dozen or so each).  Over the far side of the island we also saw our fist peat bog farming paddock.  We had seen many a homes to date with a peat stack near the door to keep the home fires burning (all year round), and smelt the result of this dried mud/grass bog creation (a very unique smell indeed) but this was our first (to be one of many) times we see where they cut it from. 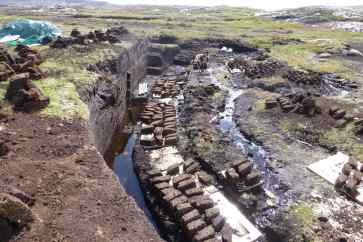 Also in Inishboffin was Els and Lei from Kristoffel whom are responsible for the photo at the top of the page (my absolute favourite) and below, great to meet this Dutch couple who told us so much about sailing the Baltic Sea…who knows we may just head north east next year to explore it for ourselves. 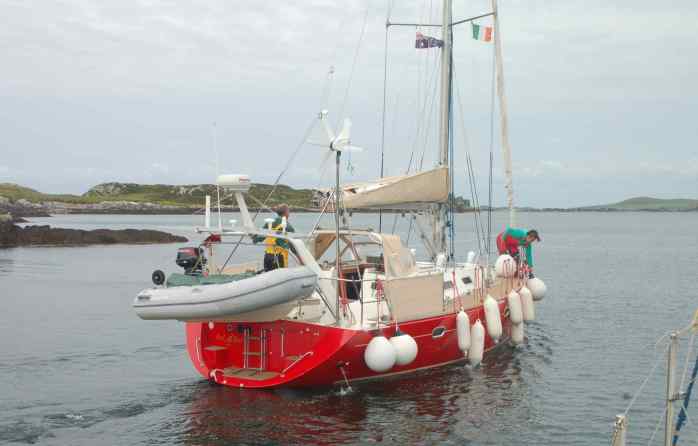 We also got a mention on the Humans of Inishbofin Facebook page!