Another Year on Red Roo Our 2018 Wrap Up Wow – another year over and it has absolutely flown by, I can’t believe we have been doing this for three and a half years now and have just spent our 4th Christmas on the boat!  We have the rigging of the Christmas boat lights down pat now!

Our cruising this year has been very short (May to Nov) compared to last year (March – Dec) see 2017 Red Roo Wrap Up for a refresher.  Our late start was due to not leaving the UK until May after a very cold, white and wet winter and waiting for our new main sail to be made and fitted.

Never the less we have accomplished our goal of reaching Morocco, travelling South to warmer climates and setting ourselves up ready to spend next year in the Mediterranean.  Our statistics for the year are below.

😀 We had a good experience in the English Channel travelling south down the east coast from Suffolk all the way down to Devon, which was a good way to leave English waters with pleasant memories – it went someway to evening up the ordinary conditions we had in the North travelling down from Scotland to Suffolk in the North Sea during 2016.

😀 It was really nice to be able to revisit two of the Channel Islands; Alderney and Jersey earlier in the year before heading into new waters.  Meeting old friends and enjoying these stunning islands again, albeit briefly.  Arriving at places already knowing what to expect, how to get the boat in safely, where essential services and shops are as well as knowing people is unique to us as besides Ipswich Haven Marina in Suffolk we haven’t ever revisited a harbour twice.  We would have loved to have been able to revisit Cherbourg whilst we were so close specifically to see our dear French friends we made when there for Christmas and New Years in 2015/2016 but unfortunately our late start out of the UK and schengen restrictions ruled it out.

😀 In 2018 we really enjoyed exploring the remainder of Atlantic France that we didn’t do in our first year covering Brittany and Normandy and were surprised at how different it was the further south we went.  Ile de Brehat, Iles de Glenan and Vannes were all real highlights.  We both really enjoy spending time in France and are very proud to sail a French Boat.

😀 We finally found a real summer!  After the last two years in North West UK and the Baltic Sea with the odd warmish day it was fantastic to finally get consistently warm, even hot days and spend days swimming in the water not just sailing on it.

😀 The Ria’s (estuaries, or sunken valley’s) in Northern Spain were spectacular, with too many special anchorages to name but we could have easily spent months drifting around there enjoying the sun, sea, sand and villages but alas we had to move on.

😀 This year we spent a considerable amount of time sailing with Kris and David on SV Taipan along the French, Spanish and Portuguese Coasts as well as John, Kara & Dean  from Sentijn in Spain and Portugal.  It was so lovely spending this time with our adopted sailing family and sharing many good times, drinks, meals and experiences.  It can be tough at times being so far away from family and friends for so long but spending time with these guys recharged our emotional batteries and we really look forward to sailing with them again in the future when we eventually find ourselves in the same oceans somewhere in this wonderful world again.  We know it wasn’t goodbye when we separated it was just see you later.

😀 We were also fortunate (or some may say skilful) enough to eat a lot courtesy of the sea.  There wouldn’t have been a week go by this year in France and Spain without at least 3 of our evening meals for the week having been fish we caught.  Life was good.

😀 One of the real stand out highlights for us was having family from the UK joining us for a days sailing on Red Roo whilst we were in Porto Portugal, we spent a great day on the water and exploring the River Douro. Magical memories.  Furthermore having William on board sailing with us for the week from Porto to Lisbon was also very special, we hope he enjoyed it as much as we did (despite the periods of sea sickness).

😀 I must also positively comment on the haul out in Portugal.  Despite the down side of 4 weeks off the water and the expense of the paint and projects we were absolutely chuffed to achieve all we did without any dramas.  Our first haul out went very smoothly and Red Roo got some much deserved love and attention on her bottom and paint work.

😀 Exploring new countries Spain, Portugal and Morocco which each showed very different landscapes, spectacular scenery, great sailing, and a host of new food experiences (always a highlight).  We thrive on exploring countries and cultures previously unknown to us, and are forever grateful for the opportunity to be able to do it as we do on board our home Red Roo.

As is life, nothing is perfect and we also had our share of lowlights, and perhaps I don’t report on these as much as I should but a couple are worthy of a mention here.

😟 On a much smaller scale we had the boat computer fail on us and lost our sailing tracks for the last three years from our navigation software.  I guess it was a romantic notion to have thought we would be able to keep all our tracks indefinatley.  It certainly pushed me into developing my Spanish linguistic skills in arranging a repair of the computer in Spain and I am pleased to report it was fixed and I learnt a few new skills in managing Open CPN whilst reloading it and I am much more vigilant in supervising Phil on the computer these days so it doesn’t break again (yes I am blaming him.) 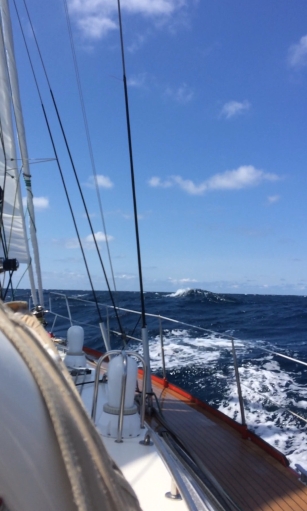 😟 After a year of intermittent starting issues with the engine, going back as far as Sweden last year (which we thought we fixed in Granville France with the overhaul of the starter motor) it all came to a head in Combarro Spain when no matter what we did we couldn’t start the engine.  This resulted in us sailing onto anchor (a new skill) and the purchase of 3 new batteries.  An easy fix for what had seemed a very complex issue.

Phil & David fault finding, myself with hair dryer as part of a voltage test

😟 The theft of the outboard fuel tank from the dinghy also features in the lowlights of the year, very disappointing but also glad it wasn’t anything more.

😟 And of course I can’t not mention the ongoing frustrations around Schengen and the limitations it places on Australian passport holders travelling Europe.

Our sincere thanks go out once again to family in the UK; Clare, Andy, Pat, Sam, Wendy & Mike as well as Jenny and Tony for all your assistance in helping us operate in Europe.  Also friends Pierre & Isabelle from Granville, France as well as Reg & Joan from Olhao, Portugal for their hospitality and assistance when we visited their home towns with Red Roo.

Red Roo continues to look after us providing us with both a home and means of travel, this journey wouldn’t be the same on any other boat.

We (again) met some really lovely people along the way and added them to our network of sailing friends, Jacob and Anneke on SV Kim (The Netherlands), David & Mary on SV Adventurous (Australia), Tony & Shannon on SV Sweetie (USA) and Robin & Geisela on SV Toboggan (Canada) just to name a few.

Attached below are links to short movies showing a collation of pictures from this years travels.