Off again ⛵️ into the mediterranean sea 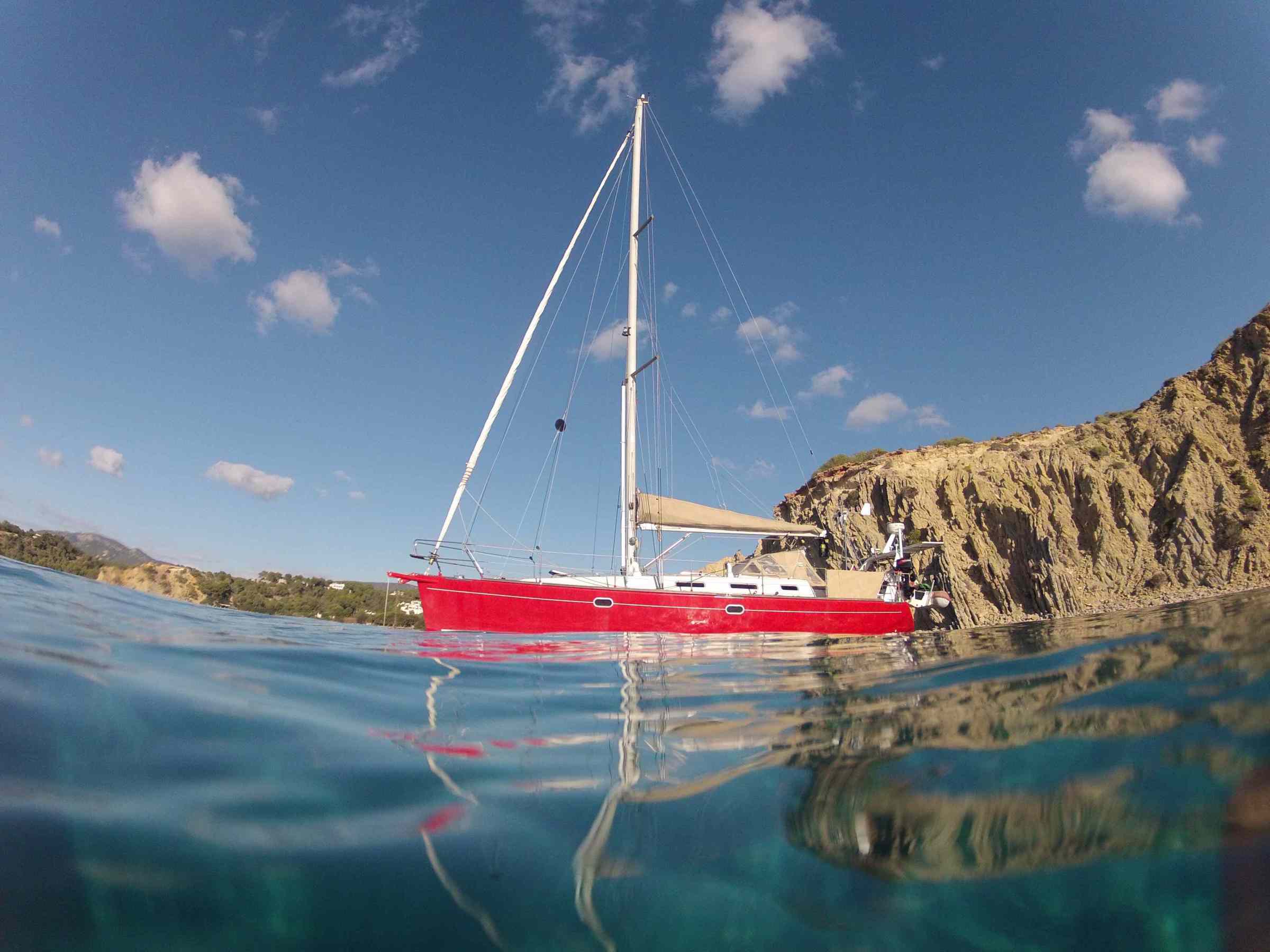 Tuesday 3rd November 2020, a day to remember – it was the day we finally threw off the dock lines at La Linea de la Concepción, Spain after our long unplanned hiatus.

This wonderful day however didn’t come easy and there was certainly more than one occasion leading up to leaving that we doubted if we would get away.

One of the more memorable was during our final test sail. We had been taking the boat out of the Marina multiple times during the  previous two weeks to test all the repaired and replaced systems parts. The test runs had all gone well and boosted our excitement about finally leaving UNTIL our very last one.  We had actually just nipped out, one nautical mile over to Gibraltar to fill up the fuel tanks with duty free diesel in preparation for our final departure. As we returned to the marina dock, at the final moment, the worst possible time as we were manoeuvring into our berth (with boats everywhere) the engine cut out dead and couldn’t be restarted, we were drifting with no engine and not enough speed for steering.

Thank goodness there was no wind to push us into other boats, we did however hit the concrete wall on the quay with the dinghy on the stern of the boat (which was the best part to hit if we had to hit anything as it protected Red Roo).  We threw a line to help on the docks and were pulled in and tied off.  The culprit was a teeny weeny 5 amp fuse in the engine wiring loom that had blown when putting the engine into reverse. Disturbingly it was factory fitted in the new system and the manual clearly states it should have been a 10 amp fuse.  Our electrical engineer assured us the new correct size fuse wouldn’t fail and we were good – I can tell you it didn’t feel good and our confidence took a hit, but we did go out again, that very same day (the old saying get back on the horse) and all was well.  It is now just an unpleasant memory, and some minor repairs to the dinghy wheels where they bent upon hitting the concrete wall.

So, as many boats were coming into La Linea to tie up for three or four months to shelter for winter we were departing … hmmmm, this seems to be a bit of a habit of ours – winter sailing … destination Tunisia 1500 nautical miles away.

After 5 days on anchor outside the marina the winds were in our favour and we were off, and spoiler alert … 38 days later we arrived in Tunisia.

In between there were some lovely picturesque anchorages and some other beautiful but very rolly and uncomfortable anchorages including one night where we rose from our beds at the midnight hour (not that we were sleeping due to the rocking) and moved anchorages as the wind changed direction earlier than forecast and we had an onshore wind and breaking waves.

Our short time in the Mediterranean Sea confirms the myth we had heard that in the Med there is either no wind or an awful lot of wind.

We mainly did small day sail hops along the southern coast of Spain heading East.  We didn’t explore land at all, in fact we only went to shore twice in 43 days between La Linea and Tunisia.  This being due to both COVID pandemic restrictions as well as VISA reasons (we had officially checked out of Europe, and our clock had started on our required time out of the EU), hence the reason we were heading to Tunisia in Africa. We were in no hurry, happy for our days out of Europe to start adding up and enjoy the water as long as we could before the weather really turned and we were once again tied to land.

The almost two months on anchor and making our way to Tunisia certainly helped get our sea legs back, we gave Red Roo a very decent work out, both the new engine as well as our sailing skills in strong winds and lumpy seas….… Did I mention there is either no wind, or too much wind!!

Our spray dodger was damaged one day at anchor off Mallorca when a hail storm came through and gave us all it had.  The hail stones were many and at least 10mm in diameter and came with such force it shredded (went straight through) all 6 of our clear window panels on our spray dodger.  We are the first to admit our dodger wasn’t in the best shape and the clear window panels were getting brittle and on their last legs, however it was still disappointing.  The next day was spent in repair mode.  I sewed in some old sail cloth for the side panels (which didn’t need to be see through, in the case of an interim repair) and I used the plastic table cloth from our saloon table for the front panels!  The upside of the event, we had ice (hail) for our drinks which we collected from the deck.

One of the highlights besides the tranquility of being alone and on the ocean was our stop at Isla de Cabrera.  A small national park island off the southern eastern end of the island of Mallorca.  In a word STUNNING, and being winter we had the place to ourselves.  Normal capacity is 50 boats all on morning buoys to protect the sea bed, and a recommendation to book 3 months in advance due to its popularity.  I will let the photos do the talking.

This was a theme as we made our way along the Spainish coast.  Whilst cruising out of season comes with some weather challenges it is certainly far outweighed by the pleasure of empty anchorages – bliss!!!

From there we made our way to the island of Menorca and went to shore to re-provision and stock up (mainly on pork products, bacon, ham, chorizo, as we were heading to Tunisia, a Muslim country) and then waited for our opportunity to cross south to Tunisia.  Due to the winter weather this was a 9 day wait for the heavy weather to subside.  With at least three of these nights being nights with one of us alert and up on anchor watch due to the fierceness of the wind and the chance we may drag anchor in a small anchorage with a fine grained sand bottom.

We departed on the western edge of a Mistral wind, (a prevailing Mediterranean strong wind from the north west) in order to sail the 350 nautical miles to Tunisia. Staying on the edge of the Mistral with wind over the port stern quarter, sails reefed down we made good progress however it did cost us, for we gave up any and all comfort for 3 nights and 2 days as on top of the 3-4 meter northeasterly swell from the Mistral which would have been reasonably comfortable, there was a residual heavy westerly swell from an earlier gale out in the Gibraltar straits which together made for an very uncomfortable ride.  Total number of photos from passage = zero (that’s how uncomfortable it was).  We both stood all our watches for the entire journey, however during the worst of it they were pretty short 2 hour watches as neither of us could manage a lot, not that it was any better being off watch and trying to rest down below.

Around midnight on the third night at sea (when we were on track to arrive the next morning, with only about 40 nautical miles to go), the wind swung around to come at us directly on the nose, a short sharp swell built over a few hours and we were really having to push into it, the bow of the boat was riding up with swell and smashing down heavily.  We were making slow forward progress.  Phil made the decision to turn off the wind, away from our destination and sail at an angle where the wind and swell was kinder to us.  It was immediately so much more pleasant, despite being in the wrong  direction and even though it meant a lot more work on Maree’s shift as we crossed the shipping lanes on the southern side of the mediterranean and had to continually turn the boat 60-90 degrees to give way to tanker traffic. By dawn we had reached the Tunisian coast but were 30 nautical miles west of our arrival port, but as we neared the coast the wind had moderated and veered to the south and the swell dropped in the lee of the coast we were able to slowly coastal sail to Bizerte, our Tunisian port of arrival. It was actually  the best part of the crossing with the sailing slow but enjoyable despite our fatigue.

Good old Red Roo performed so well and is such a solid trustworthy vessel she did all the hard work for us.  It was a unanimous decision to award the Crew Person of the Passage to the “Autopilot” and runner up being our upgraded “AIS” system.

← That sinking feeling
Tunisia – Red Roo Is Back In Africa →

10 Comments on “Off again ⛵️ into the mediterranean sea”